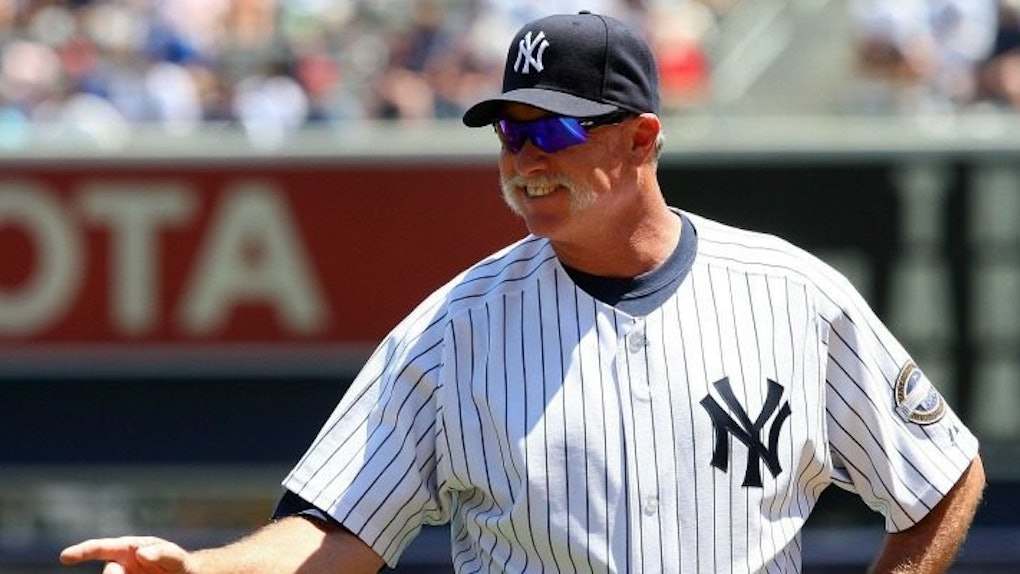 Am I the only one who thinks that as abhorrent as Goose Gossage's comments regarding José Bautista, Yoenis Céspedes and Latin Americans are, it's the exact kind of controversial bullsh*t baseball needs?

We've been told time and time again how baseball is dying. No one watches or goes to games, and those who do go to games are older white dudes who occasionally drag their families to a three-and-a-half-hour snoozefest.

It's March 11, and we're talking about baseball, folks.

Just so we have a jumping off point, here's what Goose Gossage said in a recent interview with ESPN:

[José] Bautista is a f*cking disgrace to the game. He's embarassing to all the Latin players, whoever played before him. Throwing his bat and acting like a fool, like all those guys in Toronto. [Yoenis] Céspedes, same thing.

He also attacked the "nerds," presumably dudes like Theo Epstein and Billy Beane who have been revolutionizing baseball with "Moneyball" tactics, for turning the game into a "joke."

There's no need for me to start ranting about everything that's wrong with what Gossage said; people like Bomani Jones and José Bautista have already done so quite eloquently.

Bomani Jones basically compared the 64-year-old Gossage to that old guy who you can't really take seriously, but you should just nod your head at and wait for him to stop speaking.

He's entitled to his opinion. I don't agree with him whatsoever, but I'm not going to try to pick fights with people. They say what's on their mind. If he had a reason to believe that, I would love to hear that, but I've never talked to him. I don't know him. Whatever reason or agenda he's on is fine with me. I'm not going to start picking a fight, let alone with a Hall of Famer.

Just so we're clear, this "disgrace" to the game of baseball has homered at least 25 times in each of his last six seasons. He has led the resurgence of a franchise, the Blue Jays, who, before last season, hadn't made the playoffs since 1993.

But Bautista's greatest contribution to the game of baseball is his ability to electrify a crowd and, quite simply, make the game cool again by crushing a baseball and flipping a bat as far from home plate as humanly possible.

And since Gossage went after "all those guys in Toronto," I feel it my duty to point out this is exactly how a team that wants to engage a Millennial audience in 2016 should act:

I'm sure Latin greats like Roberto Clemente would roll over in their graves knowing Goose Gossage just took it upon himself to be the spokesperson for all Latin American baseball players' feelings.

But, like I said, my intention isn't to point out how wrong the Yankee legend is; it's to shine a light on how great it is we're all talking about baseball almost a full month before the 2016 season even starts.

It's a tired sport, because you can't express yourself. You can't do what people in other sports do. If a guy pumps his fist at me on the mound, I'm going to go, 'Yeah, you got me. Good for you. Hopefully I get you next time.' That's what makes the game fun. You want kids to play the game, right? What are kids playing these days? Football, basketball. Look at those players — Steph Curry, LeBron James. It's exciting to see those players in those sports. Cam Newton — I love the way Cam goes about it. He smiles, he laughs. It's that flair. The dramatic.

Yes! Between Goose and Bryce, baseball is firmly in the nation's focus before a meaningful pitch has even been thrown.

Radio shows led with Goose's comments all morning, with many hosts keying in on the direct contrast with Harper's remarks. And, in general, everyone is coming out of the woodwork to condemn one of the most intimidating pitchers of all time, all the while showing folks do care about baseball right now.

Like, seriously, that is what Goose Gossage types are arguing. No pageantry. No peacocking. No humour. No emotion. It's friggin' hilarious. — Shannon Proudfoot (@sproudfoot) March 11, 2016

When you are still sporting a moustache from the 1970's, your views will reflect the 1970's. #GooseGossage #CleatsUp #PitchtotheHead — Gerry Dee (@gerrydee) March 11, 2016

Goose Gossage personifies the remarkable resilience of the Neanderthals, once believed to be extinct. — John Lott (@LottOnBaseball) March 11, 2016

This MLB season, I hope there are many who watch José Bautista, Yoenis Céspedes and Bryce Harper on the regular, simply on the heels of this week's comments and controversy.

You're a bitter, aging man, Goose. Thank goodness you still have the platform to stay relevant and have your voice be heard. In the end, baseball will be better off because of it.