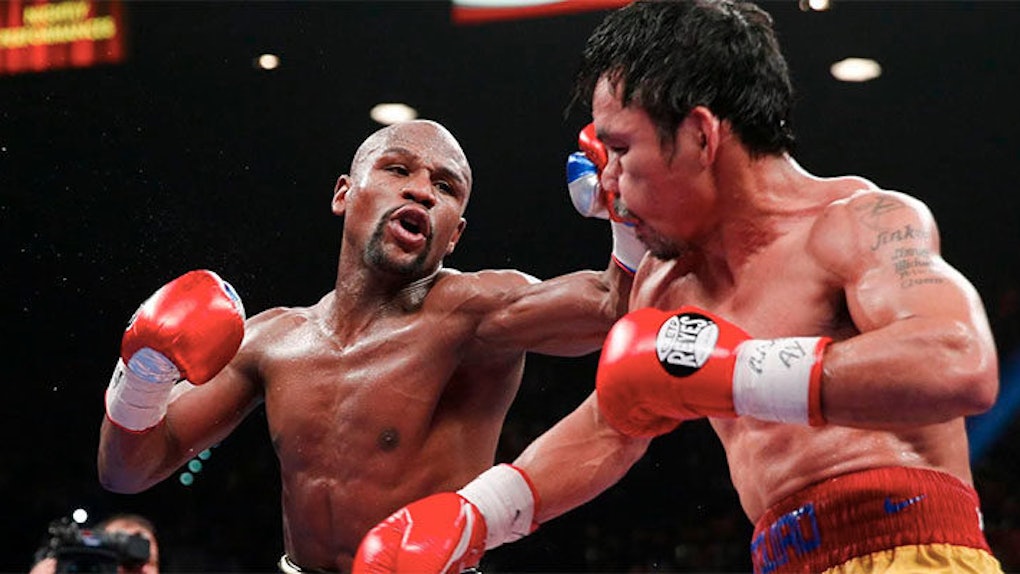 FOH: Why We Shouldn’t Pay Attention To Talk Of A May-Pac Rematch

On May 2, 2015, there was a spectacle unlike anything Las Vegas has never seen before. Excitement filled the air in every bar and every living room.

As a result of this circus, the Las Vegas airport had never had so many private jets occupying so much space at any given time before that night.

Celebrities piled into the venue to fill their seats with their Armani suits and Vera Wang dresses.

Accompanying the main attractions, as they made their respective entrances, was a king, a jester and a young adult male who bared a strong resemblance to that of a 15-year-old girl.

Yes, the anticipation was palpable, and we were mere moments away from what had been dubbed, “The Fight of the Century.”

At long last, the clash we had all been waiting for was finally at hand: Mayweather vs. Pacquiao.

It was a battle we were all sure was going to go down as one of the greatest fights in history.

But, did we receive what we, the paying public, had been promised? No, we did not -- not by a long shot.

Floyd “Funny Money” Mayweather had done what he had said he was going to do all along: dance around the ring all night and win via decision.

There’s no denying the accused woman-beater is a very good points-to-win boxer.

But, watching the fight, I couldn’t help but compare the entire bout to the comedy, “Sailor Beware,” starring Jerry Lewis.

The resemblance of the two was uncanny, as they both danced around the ring and avoided any kind of aggression from their respective opponents.

Also, there were the hugs. Who could forget the many, many hugs Mayweather brutally dished out to the “Pac-Man?"

There was a meme I saw floating around Twitter that showed Mayweather smiling with the text reading, “When in doubt, just hug it out.” I thought it portrayed the fight rather accurately.

However, it’s not just Floyd who's facing scrutiny. Manny Pacquiao has recently come under fire for not revealing a preexisting injury, and is currently being sued by at least two Las Vegas residents, as well as two California residents for the same reasons.

According to an editorial by CNN:

Having had knowledge of defendant Pacquiao's injury and its severity prior to the bout, plaintiffs would not have purchased the bout pay-per-view, or would have paid less for it.

At least one of the lawsuits contends “fraudulent concealment, consumer fraud and conspiracy to commit fraud, because the injury was not revealed until after the fight,” as cited by the article.

Possible disciplinary action could also be coming Pacquiao’s way from the Nevada Athletic Commission, as his team had checked “no” on a state medical form asking whether or not he had a shoulder injury which required evaluation.

Pacquiao's promoter, Bob Arum, said earlier the injury suffered four weeks before the fight appeared to have sufficiently healed, but Pacquiao's handlers still unsuccessfully sought to get a pain-killing shot in the shoulder in the dressing room before the fight.

But, hey, at least good ol’ Floyd is a good enough sport and willing to give Manny another shot at him a year after he has surgery to repair a torn rotator cuff.

Look, I don’t know about any of you, but I was severely disappointed with how the fight played out, and if there is going to be a rematch to the “Snore of the Century,” I sure as hell won’t be swindled into paying to watch it again.

The price of being conned again is high, and it’s a price I’m not willing to pay. If I’m the only one to feel that way, then so be it.