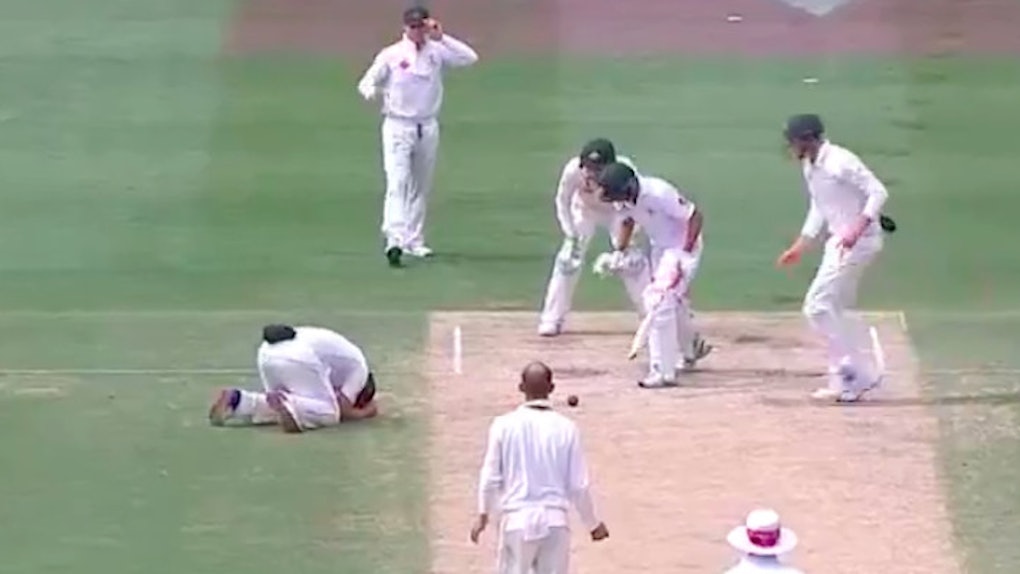 I can't be bothered to tell you what game this happened in because quite frankly cricket is boring AF.

Or, at least I used to think it was, until I saw Hilton Cartwright get smashed in the genitals by a hard ball traveling at many miles per hour.

These guys wear protective cups over their wieners, so this must have been one almighty hit to make him fall to the ground and cradle his manhood like this.

The video shows the Australian cricketer standing literally inches away from the batsman (the position has a name but meh because, as I previously mentioned, cricket is boring AF).

The batsman smacks it so hard the cameraman actually zooms out and pans to the left in anticipation of the ball flying right across the field.

Cartwright is already in a crouching position when the ball comes at him faster than a roid-head from "Jersey Shore."

Notice the Toyota sponsor tagline in the top left of this screenshot – it reads "#ohwhatafeeling." Haha. Laugh at the irony with me.

The ball bounces off his man pouch with such force his bum jiggles and dust can actually be seen exploding from his pants. Slo-mo never lies.

Luckily, his friends were on hand to nurse him back to health. They must have all felt his pain. A few of them couldn't help but laugh at their teammate, obviously – it's hilarious. Male genitals are funny. Get on board with that.

Multiple pats on the back from men in white brings a close to the most exciting play in history's most boring sport ever. BOOO.

Thanks, Cartwright, you may have just converted me to cricket. JK.

It feels like the right time to reference arguably the best Simpsons episode of all time: Hans Moleman presents "Man Getting Hit By Football."