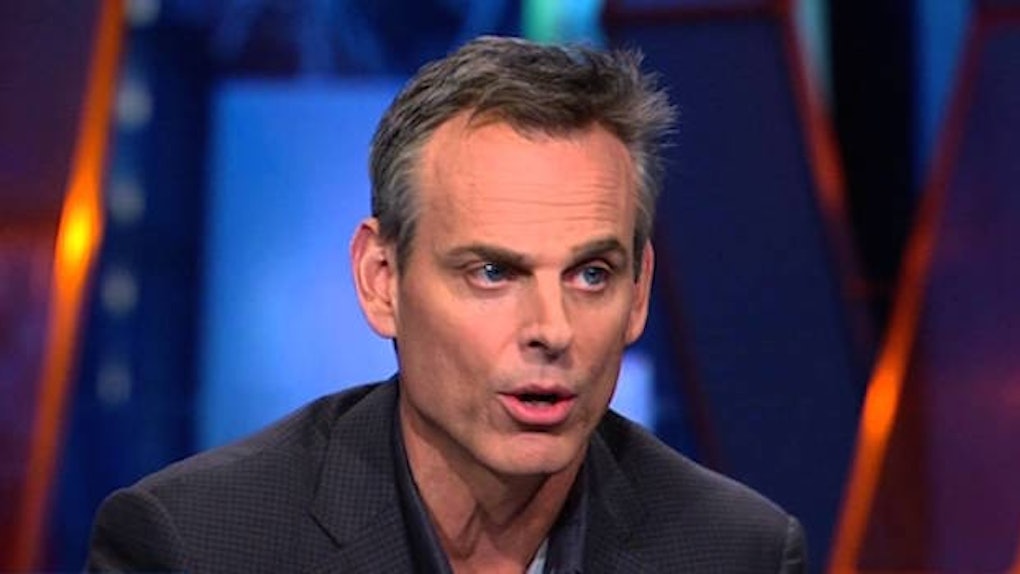 No matter what was said and who was offended, ESPN's decision to "fire" Colin Cowherd, following a rant that mentioned Dominican players and their level of education, is as phony as they come.

The idea that, after years of tolerating much more questionable and offensive social commentary from Cowherd, ESPN suddenly saw the light is borderline insulting.

The fact that Cowherd was due to air his last show this coming Friday in the wake of his new deal with Fox Sports and reports that Major League Baseball was on ESPN's case furthermore exposes the likely motives for the decision.

IMO: ESPN ending Colin Cowherd's tenure early is about. 1. External pressure; 2. His Fox deal. What is it not about? ESPN's "values." — Richard Deitsch (@richarddeitsch) July 24, 2015

This is the reality of corporate morality in 2015, a time when it seems high-profile ethical stands are made only when the noise is loud enough and when the decision is convenient enough.

And this reality is invariably the result, at least in part, of the growing trend of faux outrage.

The concept of faux outrage itself is fascinating, particularly with social media having enabled cyber mobs to gather and multiply faster than ever (in 140 characters or less, of course).

In its most detestable form, faux outrage seems to follow a set blueprint: Enough people within a company's target demographic get upset about something, the person responsible for said thing gets fired and everyone forgets what he or she was upset about.

It's trendy to call out the racist comment, and even more trendy to avoid discussing, confronting or understanding the actual racism.

It is a vicious cycle, one in which there is no room for misunderstanding or an exchange of ideas.

After all, the outcome depends so much less on who's right and wrong and so much more on how many people are offended and whether the offense can affect a bottom line.

The cycle is the reason Colin Cowherd was "fired" a week before his last show and not at any other point during his contract, when he said less defensible things but also had much more profit to generate for ESPN.

The cycle is also the reason why Donald Sterling had the LA Clippers taken away from him, but Coca-Cola and VISA continue to sponsor FIFA amid accusations of slave labor building the 2022 World Cup in Qatar.

In each case, the deciding factor appeared to be based on the risk of keeping a partnership vs. the reward of doing so, and risk vs. reward is no commendable standard for what's ethical and not.

Indeed, the cycle is ugly, but it's also dangerous. Despite the fact that the cycle appears to be ridding the media of racists, sexists and all types of bigots, the most significant thing it has done is worse than all those things.

The cycle has replaced discourse and discussion, the very things that should actually sort out what's right and wrong among us. Where unpopular opinions should prompt nuanced discussions we only have emotional reactions.

That is not something we want, for two main reasons in particularly.

First, it's become convenient for people to avoid why their actions or words are wrong in the first place.

To this day, people will avoid making domestic violence jokes only because "it's 2015" and we've all seen a TMZ tape that made everyone sensitive, and not necessarily because it's -- you know -- wrong.

Second, it puts everyone in a tough position when saying what's right happens to be the unpopular thing to say, and the cycle can very much make that happen.

Politicians love brag today about who said the Iraq war was a bad idea first, but it was ambiguously unpatriotic and unpopular to do so not too long ago.

Whether the outcome is good or bad, indulging in the cycle and the faux outrage is far from ideal, but the ideal solution also seems obvious.

We should all admit no one is perfect, admit we all make mistakes and, when we point out the mistakes of others, let that inform how we criticize.

We should also be mature and have a strong enough nerve to handle any of the arguments we deem deplorable and then have the stamina to dismantle those arguments with more reasoning and less emotion.

This much more appropriate alternative, ironically, could be derived from the nuanced manner in which Cowherd himself once criticized Skip Bayless when the latter said he'd go as far as labeling Johnny Manziel and alcoholic.

There was first a fair recognition of how tough talking about such sensitive topics can be:

I've made huge mistakes, I'll keep making them. I've had horrible segments. I've said irresponsible things. I've been an idiot. Then after a commercial break I've got to go back on the air.

And then came the measured criticism:

Skip Bayless' information was rock solid, the words he used to describe 'em were wrong and he shouldn't've used them, he's not a clinician.

Cowherd's comments about Dominican players in baseball had just enough logic to stand on and a lack of any apparent malicious intent (certainly compared to past questionable comments), so you could conclude the offensive statement was more clumsy than intentional.

What it should've prompted is a reasoned takedown of what he said, leaving the logic that made him look stupid without trying so hard ourselves.

Instead, what we got is the name-calling and the almost uncomfortably excessive and frivolous use of the word "racist" in a way that makes you question whether or not people even know what racism is.

And if I'm wrong in saying any of this, I'd hope someone would spare me the lazy stone-throwing and instead dismantle this argument piece by piece with logic.

I'd listen, too, because that's the way these things should work.