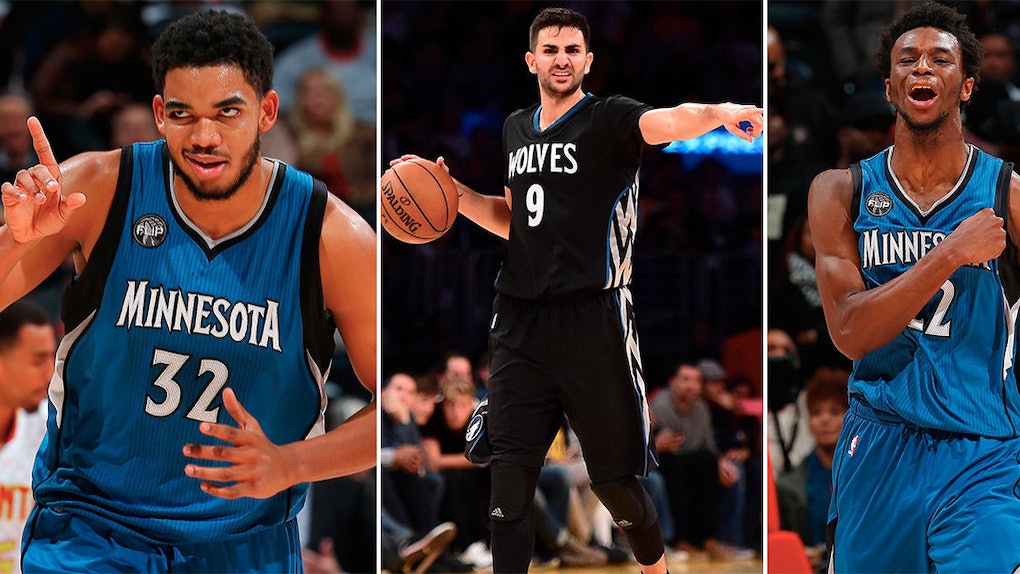 Baby Big Three: Towns, Wiggins And Rubio Are The NBA's Next Great Trio

Two decades after Boston's original "Big Three" era of the 1980s -- which featured Larry Bird, Kevin McHale and Robert Parish --the reincarnation of the Big Three era started in Boston in 2007.

That year, veterans Kevin Garnett and Ray Allen found themselves traded to the Celtics, to join veteran Paul Pierce. No one knew how long the trio would last.

But the NBA was forever changed.

Although they were dubbed the Big Three, it was truly the unselfish work of point guard Rajon Rando that brought the team together.

With Rondo, they had the complete set of an assist first-point guard in him, a deadly three-point shooting guard in Allen, a reliable and clutch small forward in Pierce and a dominant big man in Garnett.

If you take a look at Boston's statistics over the 2007-2008 year, you can easily make the comparison that the current Minnesota Timberwolves roster -- which now includes the aging Garnett -- is built in a similar fashion.

Similar to the Celtics roster in 2007-2008, the current T-Wolves roster is built on the same principles.

The difference here though, is youth.

But they still have the pass-first point guard with great handles in Ricky Rubio, a sharp-shooting shooting guard in Kevin Martin, a reliable one-on-one offensive small forward -- who is beginning to take over games -- in 20-year-old Andrew Wiggins and a rising double-double machine who patrols the paint at both ends in 19-year-old Karl-Anthony Towns.

Although Bill Simmons tweeted yesterday that the Wiggins-Towns combo reminds him of the Kevin Durant-Russell Westbrook duo, the T-Wolves core actually fits better to the mold of the Celtics team of Garnett, Rondo, Pierce and Allen.

But what is next for the T-Wolves?

The Timberwolves haven't seen playoff action since the 2003-2004 season, when they reached the Conference Finals.

But they are poised to change that with their young core.

They have the makings of a team built to compete for the next five to (even) 10 years. That is, if they can keep their young talent.

Looking at the young trio's contracts, the T-Wolves look to be set on that front.

Now, they just need to grow together as a unit and build off their initial success.

People are now more aware of the team from the Twin Cities.

They are currently sitting with one game out of the final Western Conference playoff spot at the infancy of the 2015-2016 season.

Will this young core paired with the now aging (yet still productive) leadership from Garnett be able to compete in the highly-competitive Western Conference?

Can they bring a championship to the drought-stricken state of Minnesota?

The answer is in the hands of the NBA's newest Big Three.