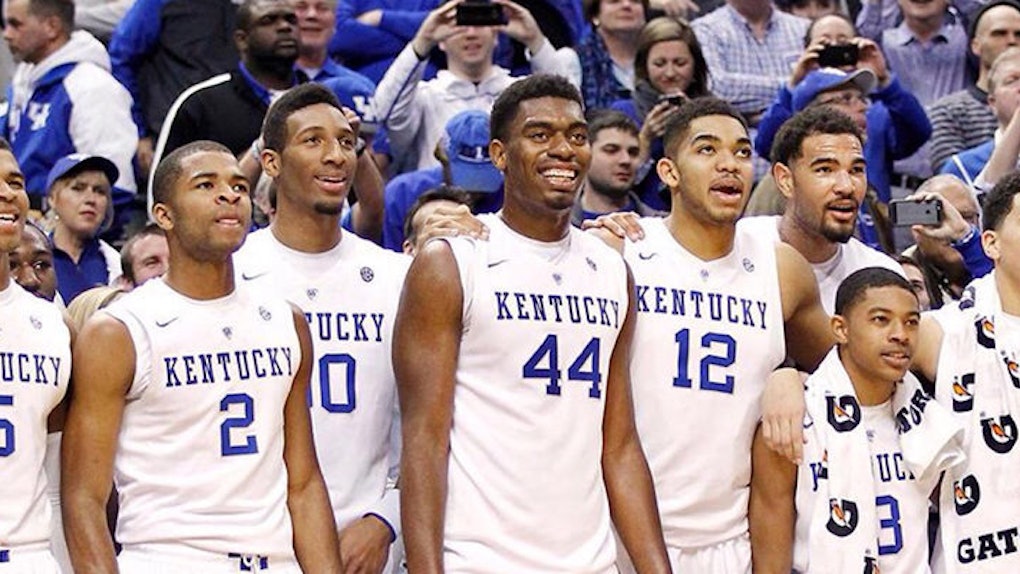 The 5 Best Bets To Make For Your March Madness Bracket

“Everybody is zero on zero,” John Calipari, Head Coach of the powerhouse Kentucky Men's Basketball team, said yesterday after brackets were announced.

“It's a one-game shot,” he added, acknowledging that the renowned March Madness tournament is a completely separate battle from the 30-plus games played throughout the regular season.

For Kentucky, that means the 34-0 winning streak can be cut off by the likes of Hampton or Valparaiso if push comes to shove.

March Madness is not about the best season performance. March Madness is a one-shot stop. Regardless of having a “1” or a “16” next to your school on a neatly organized bracket, anything can happen.

The closest thing I can compare March Madness and the undefeated Kentucky Wildcats to is the "Hunger Games" and Katniss Everdeen.

Not because I am a girl, but because I have an incredible pulse on the outcome of this tournament that I live and breathe each and every year. I have my projections, yes, but now my bracket can be just as easily accurate as the guy's who thinks the tournament is a part of the NBA.

An understanding of the matchups and pre-tourney emotions are all part of the bracketology.

Just as in the "Hunger Games," being from the same district (or school/town) gives you the right to cheer for that team, but it does not necessarily parallel the right to bias your projections.

Everybody comes to the Dance with some sort of ammo. Purdue has a physicality that can out-power Cincinnati, and Wichita State guards the perimeter better than any team in the tournament.

It's bows and arrows versus hatchets and blistering fires; there is no perfect matchup. The size and skill accomplished in practice and pre-tournament matchups is about as important as your pre-SAT scores.

Once on the court, under the bright lights and amongst the crowd, anything can happen.

So, how do we, as gamblers, trash-talkers and fans find solace in our bracketeering? Where is the logic? Where do the stats fit in?

Do we stick with Kentucky, as the heroic Katniss Everdeen who remains unwavering in fundamentals, discipline and sheer determination? Will the battle be calculated, but even-keeled so as to not buckle under the pressure and the hype?

Will the underdogs, no-names and Cinderellas pull on our heart-strings and make it to the Final Four? Or, do the Dukes and Christian Laettners of the tournament overpower those stories and bark their way to the top?

Everything is a possibility. Forget the stats, the rankings, the “it's happened befores.” The only thing you can count on is that you're going to be wrong about something.

How wrong and when you're wrong is how to best play your odds, just as enduring some venomous bites early on is a lesser evil than a fatal blow to the heart. So, here is my advice:

They may lose, but choosing them to go out any time before the Final Four is risky. In my eyes, the only team that stands a strong chance of beating them is Arizona, and the Wildcats have a tough road to that matchup to begin with.

Not picking Kentucky could give you a leg up in your pool by making a gutsy choice, but it could also end you immediately.

Your betting opponents are likely picking Kentucky to make it to the championship, as well, so your odds of staying in the game are much better.

Beware of the underdog rivalries.

Pick Wichita State to go to the Sweet 16.

Not only do they have a grudge match with the Hoosiers in the first round, but that will almost definitely get them to match up against shared-state Kansas Jayhawks, who they have absolutely nothing to lose against.

We saw what happened to KU at Kansas State, and there was no tournament championship at stake. Pick Wichita State.

Don't let the number one slots fool you.

I believe Kentucky will be the only 1-seed in the final four with Duke, Wisconsin and Villanova all busting brackets around the country by losing to 12 seeds, 7 seeds or 4 seeds.

If you want to take a gamble to get a leg up in your pool, knock those three out after the Elite 8.

Not because the statistics show they have a 66 percent winning streak in the first round or because you “know” there will be upsets and need to pick some.

Pick the 12 seeds because they're Wyoming, Stephen F. Austin, Wofford and Buffalo. Those are four very competitive and well-coached teams.

Wyoming is coming off of a big win; SF Austin has only lost four games the entire season, and Wofford and Buffalo fly under the radar, but I dare you to tune in and watch Buffalo breeze through West Virgina's full-court press.

Don't expect big things from the 8 and 9 seeds.

The majority of them are over-ranked and don't have the pizazz to get past the number 1 seed in each division. It could happen, but from a sheer, smart standpoint, it's worth knocking them all out in the second round.

It's going to be an exciting tournament, as is always the case. There will be athletes who play for the love of the game, coaches who display their finest and foulest moments and, of course, the never-ending shockers, buzzer-beaters and upsets that keep us tuned in throughout the tournament.

Don't forget that Katniss Everdeen had exactly one shot at surviving each obstacle that was thrown at her. The same is true for the tournament.

This isn't best of seven, and this isn't the best overall team, per say; this is March Madness. It's named that for a reason, and if you can put any sort of method to it, you might stand a shot at scraping up the company pool money or any other bragging rights.

May the odds be ever in your favor.