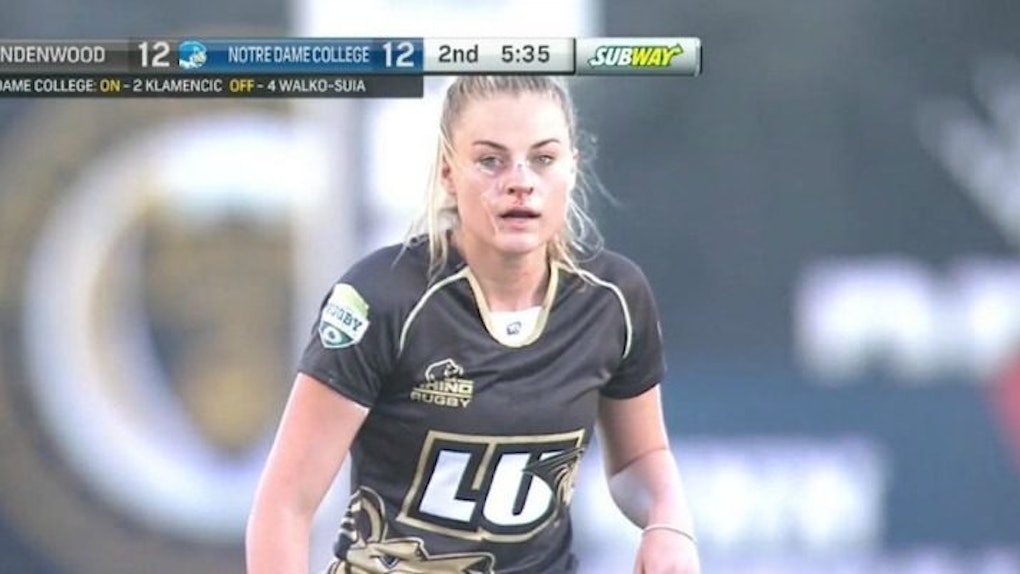 Rugby is a violent sport, but it's usually associated with beefy men running around and knocking the crap out of one another.

Meet Georgia Page, an Australian female rugby player at Lindenwood University. She broke her nose while playing in the championship game against Notre Dame College, but she continued to crush it anyway.

Not only did Page stay on the field after suffering the gruesome injury, she also made a last-ditch tackle, denying what would've been a crucial score for the Falcons.

Eventually, Page was forced off the field by the ref because of all of the blood, but she returned to make several big tackles and led her team to a 24-17 win.

After breaking her nose in the first tackle of the game, Page played most of the match in excruciating pain.

This is about as badass as it gets.

And she was all smiles after getting that W.

Page and her Lindenwood teammates are clearly not to be messed with, and something tells me there's definitely a market for women's rugby.

Citations: Are the Blokes This Tough Young Aussie Woman Rugby Player Becomes Internet Star After Video Emerges of Her Getting Her Nose Broken in a Tackle Before She Jumps Up to Lay a Bruising Tackle of Her Own (Daily Mail), The Rugby Hottie Wants All Girls To Know They Are Just As Tough (BuzzFeed)