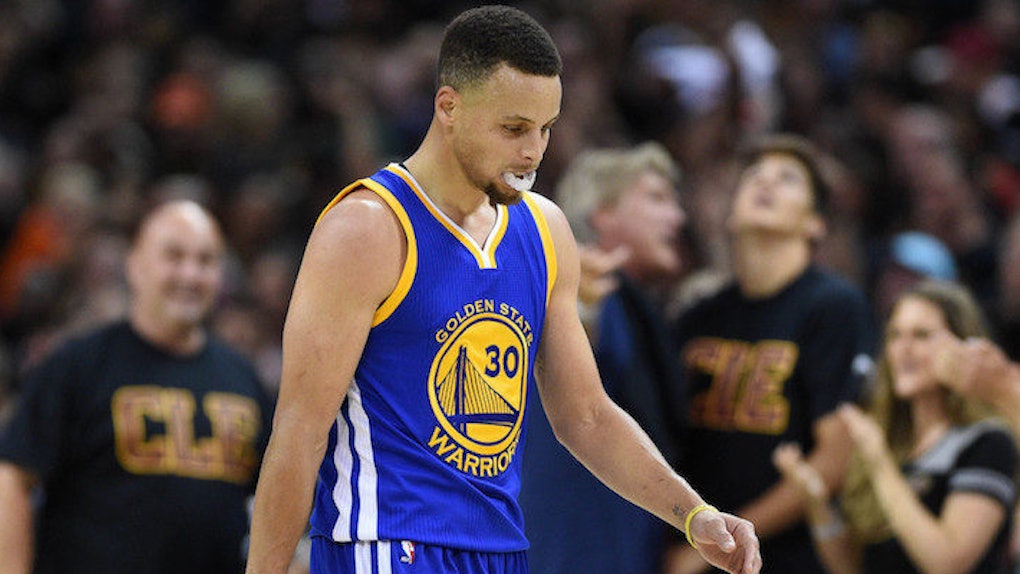 The 5 Stages Of Grief Every Sports Fan Has Experienced

Much to the delight and dismay of many, the NBA Finals are going to Game 7. The Cleveland Cavaliers upset the defending NBA champion Golden State Warriors with a 14-point victory on Thursday night.

This was led by a 41-point performance by Cavalier All-Star LeBron James, and capped off by the first career ejection of unanimous reigning NBA MVP, Stephen Curry. What was excitement for the average fan is turmoil for warrior and Cavalier fans. Unfortunately, someone has to lose, but it's tough when your team loses.

It's really tough when your team loses in the Championships. I know this all too well; I had to see my beloved New York Mets lose the World Series in their own stadium to the Kansas City Royals just last year. A few years ago, the Royals didn't even deserve my attention and now they have my score in an ire for the rest of their natural born days.

I know that may seem dramatic, but that's what a sports fans go through. When your team loses, like in the immortal words of Wu-Tang, “It's rough and tough like leather.” You go through a lot of emotions and there's one word that encapsulates all of it: grief. That's right, just as you can grieve when a loved one, pet or favorite “Game of Thrones” character dies, you can have grieve when your favorite sports team "dies."

Here are the five stages of sports grief:

Denial isn't just a river in Egypt ... do you get it? The Nile? Da Nile … okay, I'll stop. But seriously, when your team loses the big game, you think it isn't real. It looks real and it feels real … but it just can't be real.

There's no way your favorite team got your hopes up that high just to dash them. They wouldn't do that to you -- of course, they wouldn't! So you go to sleep thinking that it will be fine in the morning. And you wake up and it's not fine; it did happen.

And then you get to our next stage.

You are stark raving mad. Nothing compares to this; the anger is under your skin. Like Ayesha Curry, you get a bit salty. It heats up your bones. I'll share another personal story of my beloved Mets because I'm a glutton for punishment.

In 2006, my team was getting ready for a trip to the World Series, but that got derailed when Carlos Beltrán decided not to swing with a two-strike count. He struck out and my Mets, who ran roughshod all over the national league were going home. I'm a night owl who seldom goes to bed early, but I went to bed right after that game.

In the middle of the night, I had to wake up to use the bathroom (another rare occurrence). I'll never forget how angry I was when I awoke from that sleep and walked to the bathroom, realizing that my team was eliminated. It's enough to make your body tingle.

The worst part of it all is you're mad for still being mad. But, like a bad haircut, it fades away eventually. Which brings us to our next and most unrealistic stage.

Think of it as denial, but of a more desperate form. You actually begin to believe that if you do something in the present it will affect the past. “If I only wear more of my team's gear, that will make them champions!” “If I watch the replay of the game and concentrate by some miracle win!”

That basket missed will go in, that pass that was dropped will be caught. It just has to happen. In the immortal words of the late great Muhammad Ali, “If my mind can conceive it and my heart can believe it then I can achieve it.”

No, you can't! To quote the Three-eyed Raven, “The past is already written; the ink is dry.” You can wear your team's jersey from here to kingdom come, and it's still not going to make a difference.

It may not be what you want to hear, but it's what you need to hear.

You feel your team's failure is a metaphor for your failure. As director Alex Gibney put it in his sports documentary, "Catching Hell," “All of life's disappointments -- a lousy job, a bad marriage a terrible accident why isn't life better are all confirmed when your team loses.”

The year 1999 was a special time for me and all Mets fans my age. For the first time in our lives, our team was actually good. They started winning, there was a chance they would make the World Series and then they got beat by their rivals, the dreaded Atlanta Braves.

I believe I've cried more over baseball than I did girls. If that doesn't sum it up, nothing will. As with all things in life, there must come an end and even depression lift this heavy burden from my shoulders. When it does only then are we finally ready for the last stage of sports grief.

Your team lost … it's over. It's time to move on. What happened has happened. You must now look forward to next year. Your team may have tried their best, but apparently it wasn't good enough.

While you never get over the crushing defeat, it does get better. My beloved New York Mets will never be the 2015 World Series champions and that's OK. It's OK because I know there's always hope. They could be the 2016 World Champion or 2017 World champions; hell they can't even be the 2018 World Champions or maybe even all three. As my fellow Mets fans know, that's highly unlikely but as we say, "you gotta believe!”

Now all of this may seem a bit dramatic for non-sports fans. Even though many of my points are clearly in jest (not really), the spirit of it rings true. For us sports fans, it's more than a game; it's our heritage. In 1958, my grandfather's beloved Brooklyn Dodgers moved 3,000 miles across the country to Los Angeles.

I was born a month before the Mets won their second and last World Series title. I was born to be a Mets fan, just like some are born to be Warriors fans and Cavaliers fans or Broncos fans or any type of fan.

For us fans it will always be more than a game.