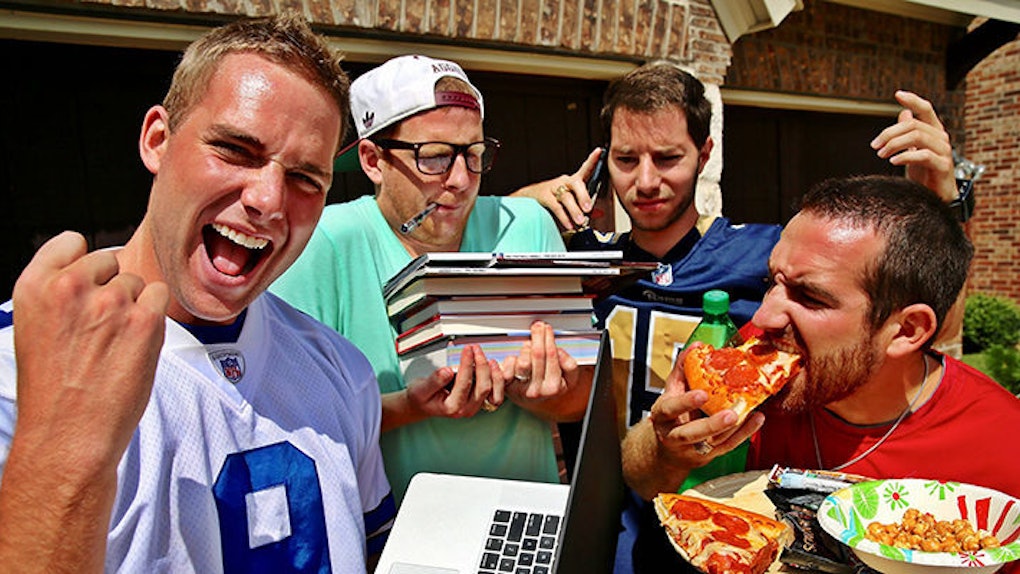 If you thought FIFA was corrupt, you should know there are fantasy football leagues out there that makes what they're doing look like child's play.

I know this because I've lived through it and it just gets emotionally draining, especially after 17 weeks.

From insider trading to midseason rule changes, you'll soon find out which one of your friends or coworkers lacks integrity and cannot be trusted. And also, you'll see how much no one really knows about football.

Over the course of the fantasy season, sleepers emerge, first round draft picks get injured and most importantly, people change.

These are 15 ways you know you're playing in a corrupt fantasy football league.

The person who created the league miraculously gets the no. 1 pick via "random" selection.

It's always so convenient when the person who made the league coincidentally gets the first overall pick, too, isn't it?

This is the first (and obvious) red flag that you're playing in a corrupt fantasy football league. If this happens first, you're doomed.

Everybody is invited to a live draft time that's only convenient for three people.

Fantasy football is all about politics and if your availability isn't important enough to be considered for the league's draft, then you really ain't sh*t.

The only member who has experience using an auction draft tries too hard to convince you it's "easy" to understand.

Look, we understand you have a higher chance of getting more of your favorite players, regardless of rounds, but not doing a snake draft is straight-up stupid and un-American.

An important part of fantasy football is taking the whole two minutes to draft your player and immediately regretting your decision. Then, waiting for 11 other people to do the same.

Only four people put their money into the pot before the start of the season while the rest are like...

If the money isn't in before the draft, it's a wrap.

Then when you win and ask them for the cash later on, they just hit you with "I got you."

Venmo me that sh*t or something!

You don't use PPR because one person doesn't understand it.

Side bets for weekly matches are bigger than the actual league prize.

This is where egos start to get in the way of the game.

Remember, it's a 17-week season and you don't want to go completely broke by the end of it.

Trash talking starts to get way too personal and becomes not even about football.

What did you just say about my hypothetical kids?!

There's insider trading between the league scumbag and the dude who doesn't care about his team.

There's always that one league scumbag who tries to take advantage of those weaker than him and he or she is usually pretty successful.

The scumbag capitalizes on insider trading with someone who knows nothing about football or tries to give you sh*tty advice on who to start at your flex.

One of your perfectly even trades gets blocked for no reason besides haters.

I'll admit sometimes we make trades just for the hell of it, but there's always that one person who will shoot yours down, even when it's a totally even swap.

It's probably the scumbag I just mentioned above, too.

Rule changes are made out of nowhere right in the middle of the season.

Changing the rules in the middle of the season is like Obama saying "just kidding" about those 46 sentences he commuted and sending them all back to jail.

The playoff format is fixed so more teams can make it.

It's getting close to the end of the season and a couple people realize they're not going to make the playoffs.

So, what do they do? They somehow manage to change the entire format of the playoffs, so that pretty much everyone makes it, and compromise whatever integrity your league had left.

The league member with the least knowledge of football somehow ends up with the best record.

This always seems to happen, and it's just a reminder that fantasy football is all subjective.

Overthinking sh*t will always get you burned in the end, so stop listening to the analysts.