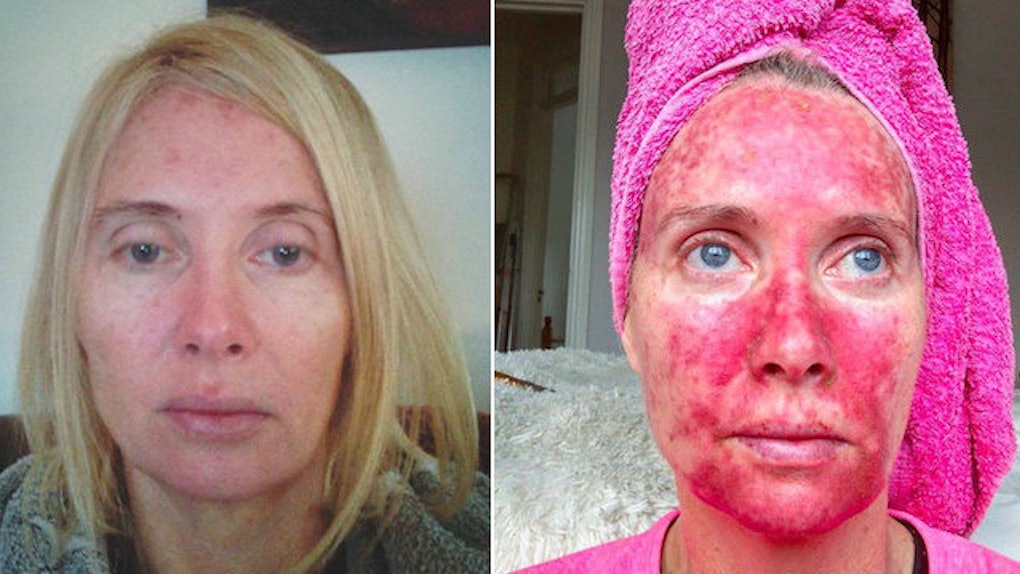 I'll be the first person to admit I wish tanning wasn't bad for your skin.

I'm paler than freakin' Casper the ghost with Irish genes that've blessed me with loads of freckles and skin that turns red with the touch of a sunbeam.

In fact, the only "sun" that doesn't color my skin to the hue of a tomato is the fake glow of a tanning booth (go figure).

But as much as I loved the golden results of the tanning booth, I finally accepted the fact that tanning is bad for you -- so I stopped.

In case you haven't been convinced of the dangers behind tanning yet, Margaret Murphy is here to help persuade you.

According to Metro, the 45-year-old woman from Dublin is currently in the process of removing the pre-cancerous cells from her face that were caused by tanning.

Apparently, the sun-lovin' mother-of-one spent a decade living in Crete and neglected to use sunscreen the entire time. She also admitted to using tanning beds while she spent summers in Ireland.

Because of the unprotected sun exposure, Murphy was diagnosed with Actinic Keratosis, which is caused by ultraviolet rays. If left untreated, it could've turned into skin cancer.

Right now, the warrior-of-a-woman is undergoing an Efudix treatment. It consists of applying cream to the skin that will burn the pre-cancerous cells off her face.

It sounds (and looks) terrifying.

To warn people of the dangerous results of tanning, Murphy created a Facebook page to document her journey called Mag Murphy's Journey.

For 18 days and counting, she's posted photos that show the results of the cell-burning cream.

As a preface to the photos, she said,

Unfortunately all this lovely tanning has a price to pay cause now I have PRE cancerous cells on my face and have started treatment to remove them, I've to use a cream that's going to burn them out, apparently it's quite painful and gruesome as the weeks go on but on the good side it should get rid of the cells and treatment and is only for a month.

The photos she began sharing start with day three, and it didn't look too painful.

However, as the weeks grow longer, Murphy's face grew redder and the results of the cream became obvious.

By day six, she spoke about her face and said, "feels I've shaved my face with a dry razor."

On day 10, she talked about how itchy her face was and said she "can't scratch it so just tap my face to hit the itch, I'm sure I look like a looney."

But by day 14, she was halfway there.

My face is burning and throbbing today, my chin feels the worst, it's a little swollen and I'm sure something is going to erupt from under there.

Murphy's most recent post was on day 17, where her entire face appears to be swollen and red.

She captioned the harrowing photo,

Skin is so tight I'm finding it hard to open my mouth, can't smile can't yawn ,on the bright side only 11 days left.

By sharing these pictures, she wants to show people the dangers behind foregoing sunscreen.

If these pictures aren't enough to persuade you to use protection while you're in the sun, then I'm not sure anything will.

Thankfully, Margaret is on her way to recovery.

Citations: Mother's pictures will make you never want to go on a sunbed again (Metro)