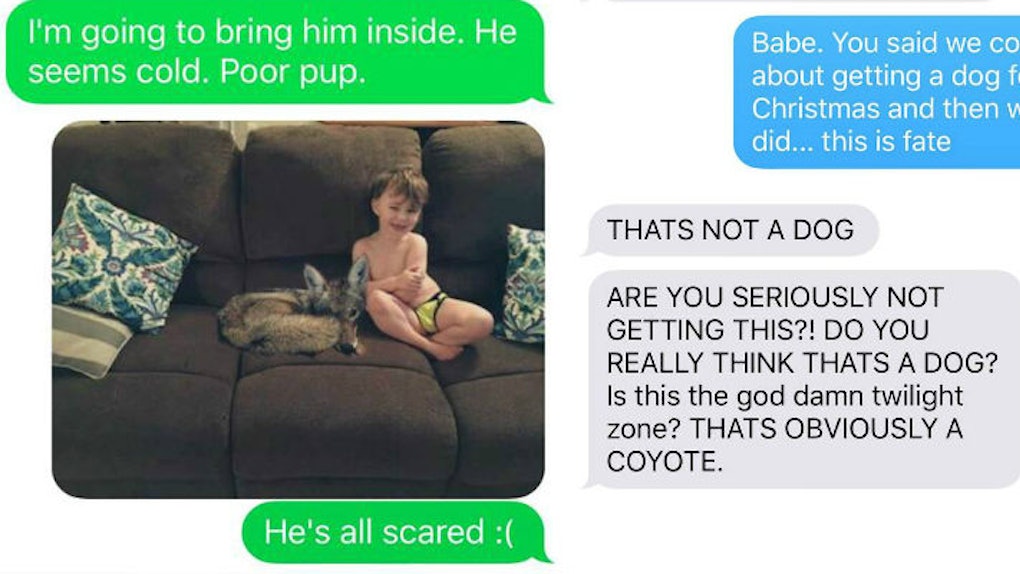 Woman Tricks Husband Into Thinking She Adopted A Coyote

Photoshop is a powerful tool and should only be used responsibly...

Like for smoothing out frizzes in my dating profile pictures and convincing people I have rock hard abs... you know, the Lord's work.

It should absolutely also be used to prank your loving husband.

Kayla Eby, of Oregon, sent her unsuspecting husband a quick photo of a coyote and explained that she found a "cute little dog outside" without tags and she would bring him in because he seemed cold.

Including your small child in on the prank is truly a work of art -- kudos to your photoshopping, friend.

Eby's husband, naturally, was not amused and seriously worried about his wife's mental state.

However, she did not yield in her pranking.

How he didn't realize that this was photoshopped, I'll never know.

I suspect it had something to deal with the fact that a potentially wild animal appeared to be mere inches from his child.

Honestly, the fact that he is telling his wife that he sincerely loves her, despite her convincing him she brought a coyote inside, is pretty much #relationshipgoals.

Sadly, all good pranks must come to an end. I would have loved to seen more coyote photoshop shenanigans.

If I were the husband, I would kind of feel a pang of disappointment after all of that. Who wouldn't want to come home to a coyote as your new pet?

Sure, it may take a few fingers off of you, but you know what else it would steal? My heart.

Of course, it should be said that a coyote, despite being cute, should not be your pet. As pups they are very docile and bond with humans, but when they get older their instincts and hormones kick in. BUT THAT'S NOT GOING TO STOP ME.