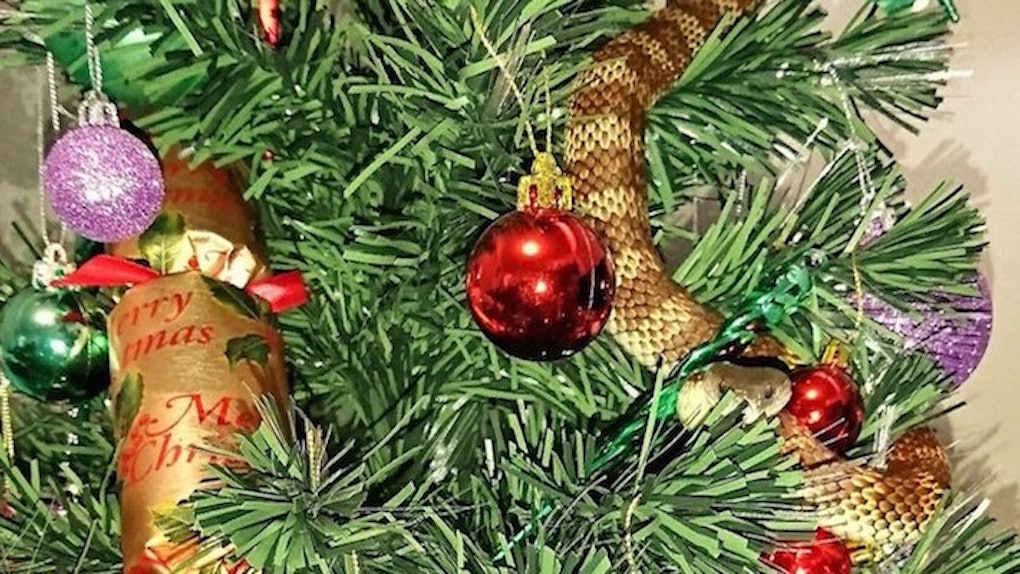 I had a pretty unconventional childhood.

My father happens to be a herpetologist (aka a biologist who studies reptiles), so growing up, my dad would constantly bring home all sorts of new and interesting creatures.

In fact, we even had a room in our house dubbed "the snake room." It contained countless cages filled with every sort of scaly creature you could possibly imagine.

When you have a room full of reptiles in your house, one is bound to escape from its cage every now and then.

I learned this from an early age when I was digging through a chest of Barbie clothes in search of my doll's leopard-print jacket and accidentally picked up a leopard gecko that had been on the loose instead.

As you can imagine, this little lizard incident scared the shit out of me.

However, it turns out I'm not the only one who's been caught off guard by a sneaky, slithering critter.

A woman from Frankston, Australia, got the Christmas present no one ever asked for when she found a tiger snake wrapped up in the branches of her Christmas tree.

The thought of discovering a snake in your Christmas decorations sounds generally terrifying, but also...

It turns out the species this woman mistook for a garland is actually pretty dangerous.

@Team_Zimm @Timdoutre No, no! Don't ever muck with a Tiger Snake unless you really want to die! They are extremely Venomous! — lisa witham (@cheezwitham) December 19, 2016

As you can imagine, this sort of Christmas present is a big "nope" for most people.

In fact, I think it's safe to say most of us would rather find coal under our tree for the rest of eternity than realize a tiger snake has turned our Christmas tree into a cozy new home.

Other people on Twitter have shown concern for the fact this women didn't find the snake until after she was done decorating the whole damn tree. SMH.

All I can say is this terrifying incident is further proof everything in Australia is trying to kill you, even the Christmas trees.