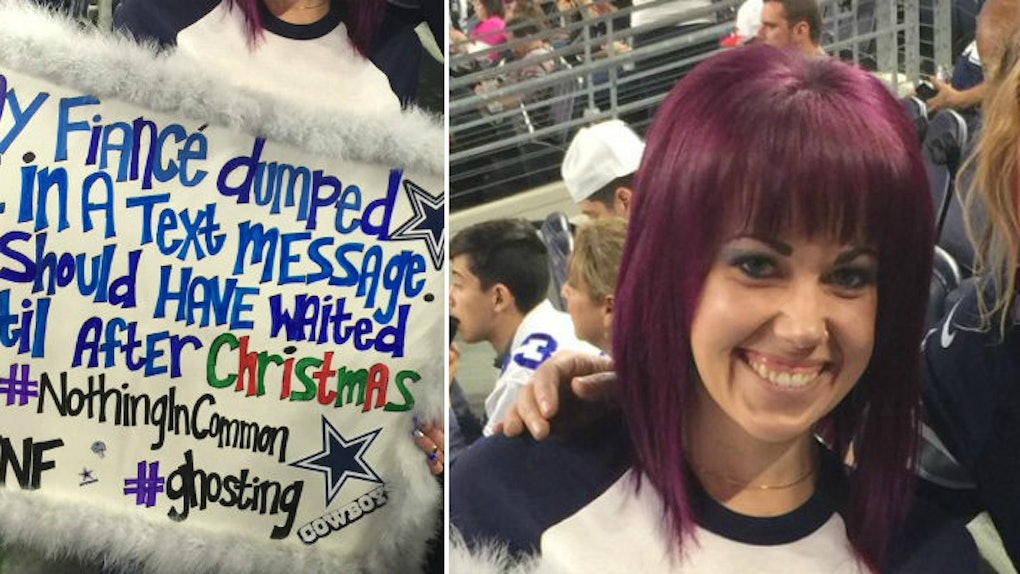 Woman Responded To Fiancé's Break-Up Text Like A Boss

Breakups are always hard, but imagine being told by the person you intended to marry they didn't want to be with you anymore...

Through a text message.

YOU CAN'T TEXT-MESSAGE A BREAKUP.

Brenna Clanton of Austin, Texas planned to surprise her fiancé with Dallas Cowboys tickets for Christmas.

She even bought the tickets in October and scored some incredibly up-close-and-personal seats for the December 26 game against the Lions. She also booked an Airbnb so they could crash after the game.

It would have been his first time at AT&T Stadium.

Except, a week after she got the tickets, her tool of a fiancé (who proposed to her in June) broke up with her through text message.

His excuse? They had "nothing in common."

Uh, you both love the Cowboys, jerk???

Despite the breakup, Clanton was still going to go to the game.

She told the Dallas Morning News,

I was just going to take my best friend instead. My fiancé dumped me in a text message. He should have waited until after Christmas.

Alex McDaniel, a journalist, saw Clanton and her sign and tweeted out the image.

Clanton, a former cheerleader, expertly crafted the sign for a little bit of revenge. She said,

I decided to have some fun with it, this was my little get-back to him. I thought this might show up on the jumbotron or TV broadcast and I knew (my ex) would be watching the game.

Clanton could probably forget all about her ex after witnessing her team win 42-21. She added,

Just being in the seats I was in, I had never been that close before. I've been a huge sports fan my whole life and that was a whole new world.

Ah, yes. There's a whole new world of being single, winning football games and moving on from fuckboys who break up with you through text.

Citations: When Her Fiancé Dumped Her By Text, What This Woman Did Next Went Viral (Cosmopolitan)