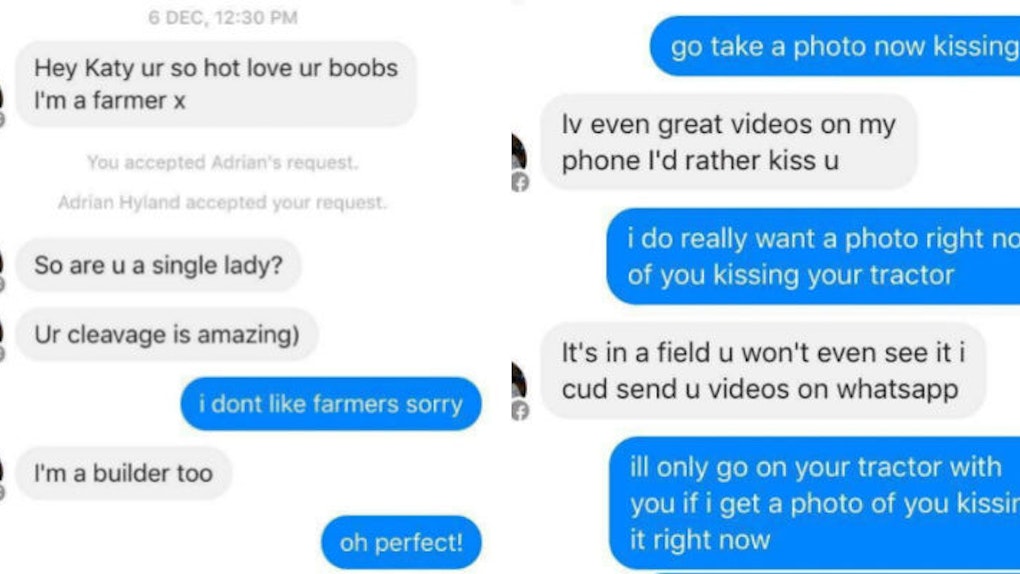 If you're a woman on the internet, then you have probably been asked to send nudes at least a couple of times.

I mean, I haven't, but I think that has to do with men realizing pretty early on that I'm a sea witch. (The tentacles in my profile picture give it away.)

Men also have this ability of hounding for nudes in a tenacious way that women would kind of admire, if it wasn't so gross.

Imagine having the blind confidence to ask a perfect stranger to get naked for you on the internet. Has this ever worked for anyone? I'm, uh... asking for a friend.

A twitter user, Katy, epically shut down one farmer named Adrain who tried to slide into those DMs.

Guys, this is not how you open a conversation.

"When will a guy call me so hot and love my boobs and also be a farmer?" said no one, ever.

It's a two-way street, buddy.

I don't believe in one-way streets, not in sending nudes and not while driving.

You wanna take a creepy peep at me, then you better go kiss your tractor in the field.

Isn't there some weird country song that suggests a woman finds his tractor sexy?

What a weird fetish to have — an attraction to farm equipment. I'm not judging.

Did he think kissing a tractor would really end in nudes?

Katy was left almost speechless. She could only utter one word:

Sorry, pal. You can't just kissed a tractor and expected naked pics to show up.

Trust me, I've tried. I've kissed so many things hoping that somehow, someway, my DMs will be filled with boobie pictures.

Citations: Brilliant woman gets thirsty stranger to kiss a tractor for a chance at nude pics (Mashable), Twitter