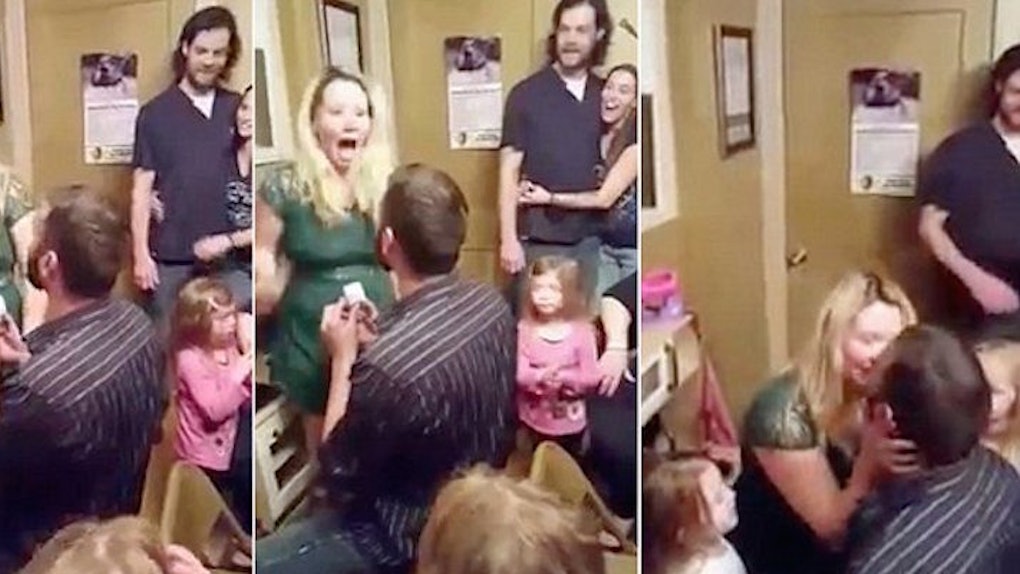 It takes a lot of courage to drop down on one knee, whip out a ring and pop the question to the person you love most.

Therefore, it would be nice if your SO paid attention while you propose.

Case in point: this distracted woman who totally missed her boyfriend asking her to marry him.

That's right. A video recently surfaced online that captures the moment when a woman is totally oblivious to the fact that her boyfriend is kneeling right before her with a ring in hand.

If having your girlfriend miss your proposal isn't bad enough, this fail happened in front of a whole room of people.

Apparently, 38-year-old Matt Satterfield and his 28-year-old girlfriend, Clara Chasteen, were hanging out with friends and family at a holiday gathering on November 18.

Chasteen seemed to be so caught up in her conversations, she didn't even notice when her boyfriend of two years got down on one knee and tried to pop the question.

After a few moments, Chasteen finally sees her boyfriend bending down holding a ring box and realizes what's going on.

You can see an expression of surprise suddenly spread across her face as she screams with excitement.

Chasteen doesn't waste any time saying yes to the proposal, and then she gives her future hubby a big smooch as all of their friends and family cheer them on.

It took about 15 seconds for Clara to notice. When she screamed, she scared me as much as I had her with my proposal. I hadn't told anybody in the room until an hour before, so it was pretty easy to keep the surprise. I couldn't have been happier when she spotted me and agreed to be my wife.

It turns out Satterfield had originally planned to pop the question during a special trip to New York City at the beginning of December.

However, things didn't go according to plan, and Satterfield had to scramble to come up with a new way to propose.

Clara has wanted to visit at Christmas time since she was a little girl, and when I started planning the proposal, most of our friends were going to take the trip with us. Since we only gave them a month's notice, our friends ended up backing out and I knew it was just going to be us going. I knew that it was important to Clara for our closest friends to witness the proposal. I decided, 'What better time to do it than at our home when we would be surrounded by our loved ones at our Friendsgiving?'

Let's just hope Chasteen is paying attention when it comes time to say "I do" on her wedding day.

Citations: 'It took about 15 seconds for her to notice': Oblivious girlfriend completely misses her boyfriend's proposal in hilarious video (MailOnline)