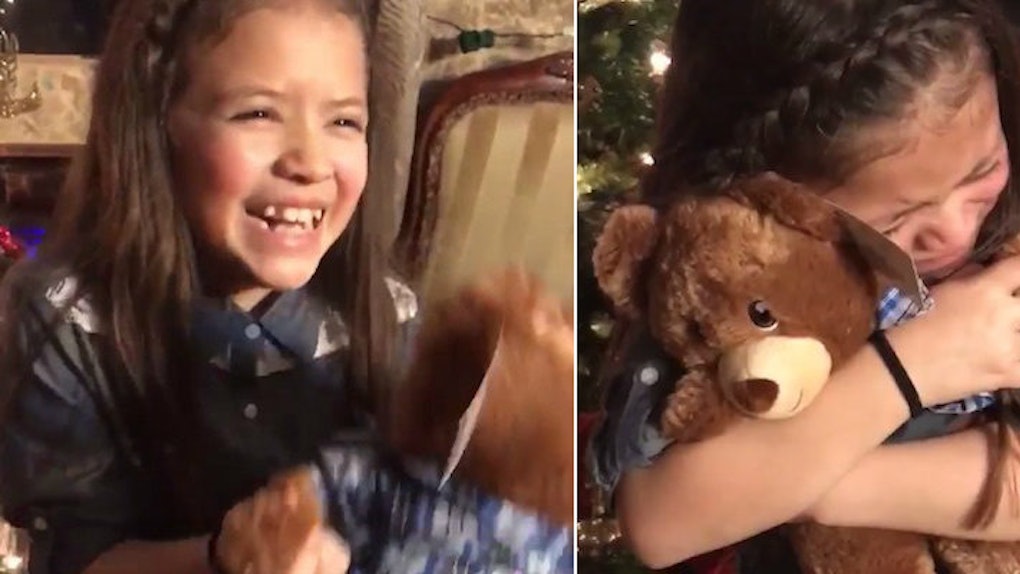 If you thought you got the best Christmas gift this year, you are sorely mistaken.

Mariana and Sarahy Ramos received presents this holiday season that were so special, the young Oklahoma girls sobbed uncontrollably.

The two sisters were given teddy bears specifically built so their late grandpa's voice could be heard at the squeeze of a paw.

Now, these special bears allow them to keep their grandpa close.

Apparently, the girls' older sister Jennifer talked about the emotional moments they opened the gifts from their aunt on Christmas Eve.

In the video Jennifer posted on Twitter, Mariana is captured opening the gift first, completely beside herself at the sight of the stuffed animal.

A few moments later, a voice tells her to press it, so she starts squeezing the fuzzy toy all over and waits for a sound.

After her grandfather's voice emanates from the teddy bear, Mariana smiles and immediately starts crying.

She hugs the bear tight in her arms and closes her eyes at the sound of her grandpa's voice.

Moments later, the camera pans to her sister, Sarahy, who also hugs the bear close and starts to cry through her smile.

The youngsters are so overwhelmed with emotion that we can't help but cry along with them.

My heart is broken for these girls, and yet, so full.

The men involved in Jimenez's death were allegedly arrested and charged for murder and robbery.

Since then, Jimenez's family has been heartbroken at their loss.

We're used to having my grandpa around for the holidays. It's been really sad for us not having him.

Luckily, Mariana and Sarahy will be able to hear their beloved grandpa's voice at the tug of their teddy bear's paw.

Now that's the best Christmas gift of the year.