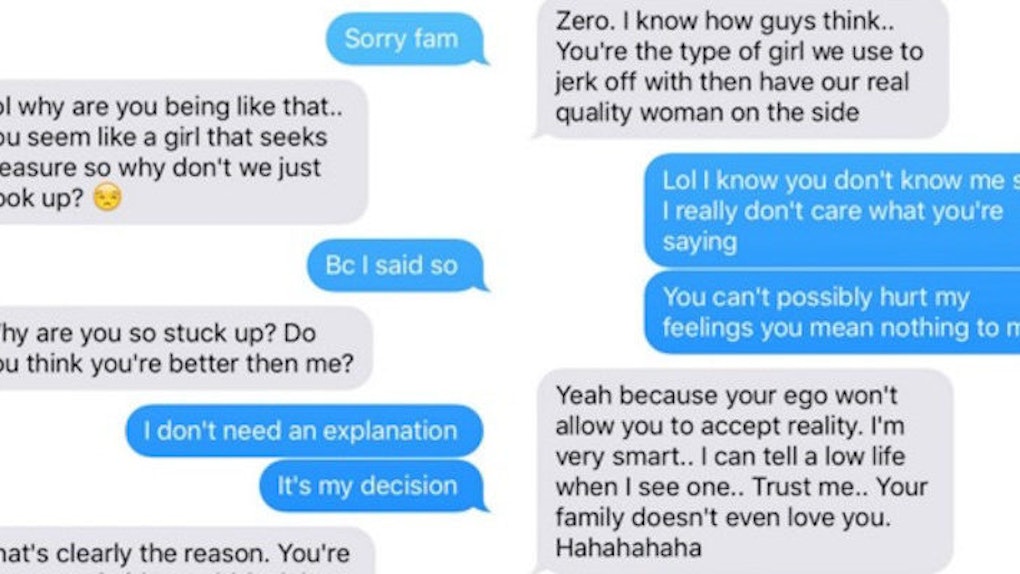 Pro tip to all my fellas out there on Tinder: If a lady doesn't want to have sex with you, just accept it and move on.

Do NOT send her a series of rude AF texts. She will tell all her friends about it, and you will have a very difficult time ever getting laid again.

Don't be like this dude Endri, who apparently sent Arielle Musa some pretty vicious texts after she turned him down.

After the date, Musa's friend Tamara shared the crazy texts on Twitter. Here's a warning for strong language, racial slurs and the rantings of just a God-awful dud; you will be angry after reading these texts.

Apparently, Endri spent $3o on tolls and wants his money's worth. He seems to be confusing dating for prostitution.

BTW, Endri, even if you're looking to get with a real prostitute, 30 bucks isn't going to get you very far.

Then, Endri thought it was his place to tell Arielle her family doesn't love her. Cool, definitely not overstepping there at all.

Apparently, even Twitter was turning on Arielle, so Tamara had to post an extended version of one of the texts.

And here's the rest of that text for those of you calling her an escort pic.twitter.com/WBSUbKIkoz — tamara (@araferal) April 12, 2016

Arielle told Metro Endri later sent her more texts demanding she pay him back for the date. When she refused, he told her to delete his number.

I'm sure Arielle was only too happy to delete your number, bud.

AWESOME, love it when guys feel entitled to sex to the point of getting scary when they don't get it.

Unfortunately, as most women know, this is not such a rare occurrence. So many ladies have a story of guys freaking out when denied sex.

Shout out to all the Tinder dudes who just listen to some sad music and jerk off when they get rejected instead of verbally abusing women!

Citations: 'You will be alone forever': Woman shares the insane text rant she received from her Tinder date after refusing to sleep with him on the first night (Daily Mail), Girl goes on one date with a guy, chooses not to hook up, and gets sent an insane text rant (Metro)