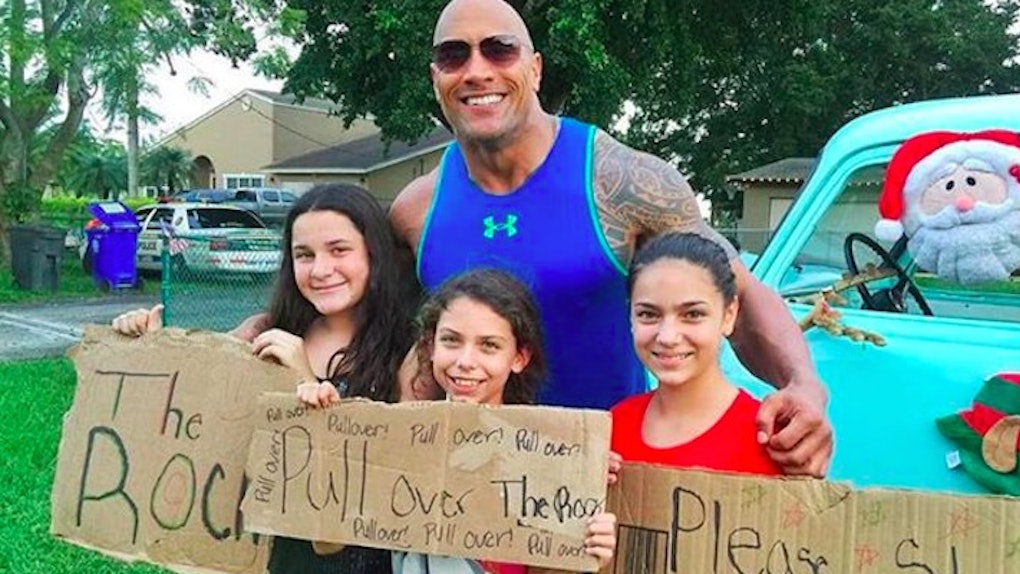 It's well-known that we here at Elite Daily are huge fans of The Rock.

Time and time again, The Rock has proven just how awesome of a human being he is. We could probably never write another post about The Rock again, and we'd still be his biggest fans.

But, of course, we won't stop writing about him because he keeps doing awesome stuff, like stopping on the side of the road to simply say hi to a couple of adoring, and adorable, fans.

On Monday, The Rock posted this photo to Facebook:

Maybe it's random or maybe it's holiday fate... either way it makes my heart sing... I decide to take a Sunday drive in... Posted by Dwayne The Rock Johnson on Monday, December 7, 2015

I decide to take a Sunday drive in my pick up to run errands and go train at my buddy's gym. As I'm driving down the road I see three young girls holding signs that just say 'Beep', 'Happy Holidays' etc.

He continued on his way, thinking nothing of the girls and their signs. On his way home, however, he spotted the little ladies again.

I go train and run my errands and over 3 HOURS later I'm driving back down our little backroad and the same three angels are standing by the side of the road - only this time they're jumping up and down, waving and screaming as I drove by. I thought, 'Did those signs say my name?'...'Should I turn around just in case?'

He explains, after slamming on his breaks, he looked in his rearview to see the girls going "bonkers."

He quickly turned around to say hello to the girls. The Rock says,

These little angels waited outside for over 3 hours for me to hopefully drive back down their road.. their mom and dad came running out and we all exchanged hugs and took pics. I made sure I got a pic with my phone, wished them all Happy Holidays, got back in my truck and went on my way. The coolest part of this whole random (or maybe fateful) act is that by turning around I literally got to meet some of the sweetest and kindest little ladies and family I'd ever met. May sound silly or corny, but moments like this are by far the greatest part of fame. Happy Holiday's y'all and thank you universe for this awesome moment.

Now, if only The Rock would make Elite Daily's dreams come true and come visit us too. (We'll make signs and everything!)