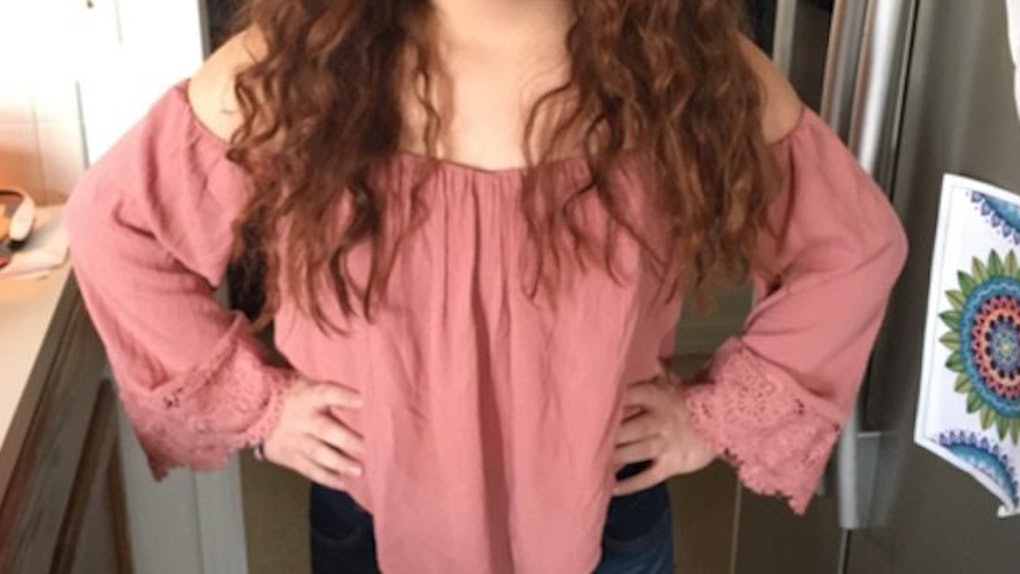 School dress codes have become a controversial topic, and young female students are currently experiencing double standards that come along with their clothing restrictions.

Most students argue their dress codes sexualize and objectify them by singling out their bodies and blaming the wearer for their peers' judgements and actions.

While dress codes vary from school to school, they still ostracize young students for wearing clothes that are (usually) not inappropriate.

One girl named Isabella Rossellini was astonished her 13-year-old sister was "dress-coded" at school on Monday, so she decided to take action.

Her younger sister, Grace, wore a pink off-the-shoulder top from Charlotte Russe to school and received "looks" from her teachers while she was in class.

In my opinion, this shirt is NOT inappropriate. In fact, it's adorable and I'd like to buy one for myself.

I went into school and I received some looks from teachers, just not nice looks. Instantly I was like—okay, I'm going to get dress-coded and I felt the need to change.

The seventh-grader explained she didn't get into any formal trouble from her top, but was compelled to change after her teachers "commented negatively" on the blouse.

Soon after the seemingly passive-aggressive confrontations in class, Graces's older sister, Isabella, became angry at the fact that her teachers thought her shirt was inappropriate.

Like any supportive big sister would do (I hope), she helped Grace out and made a badass shirt she could wear if she was ever asked to change again.

Isabella wrote her own definition of the school's dress code on a white T-shirt, saying,

Dress code: -Promotes the objectification and sexualization of young bodies. -Blames the wearer for the onlooker's perceptions/ actions. -Perpetuates rape culture. -Is BS.

Isabella commented on the homemade shirt,

I made her the white shirt and told her to put it in her locker and if they ever ask her to change again, to change into that shirt.

She shared the picture of her little sister's new shirt on Twitter, and users fell in love with the message.

In fact, people love it so much they're asking for their own.

Isabella responded to someone who asked if she's selling them on Etsy yet, and said "setting up a way for people to buy printed tees right now!"

I have a feeling she's going to get a lot of orders. You go, girls.

Citations: This Teen Made Her Little Sister A Shirt To Wear If She's Dress-Coded At School (Buzzfeed News)