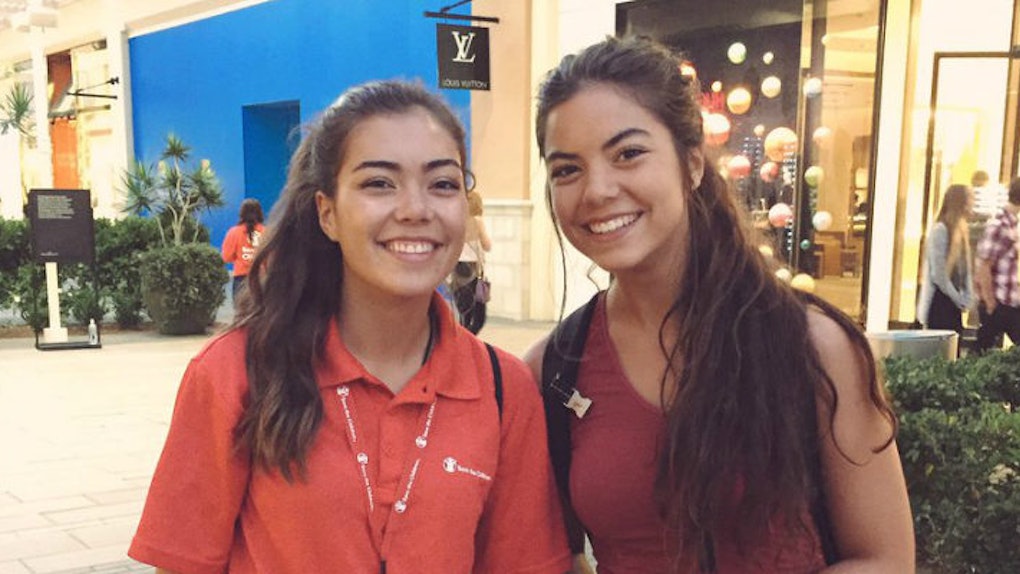 This Teen Found Out She Has 6 Doppelgängers

Do you ever think to yourself, "Hey, there must be like six or seven people out there in the world who look just like me?"

Well, you might be right. I always knew my wacky conspiracy theories would pay off!

According to BuzzFeed News, 17-year-old Santana Gutierrez stumbled upon her doppelgänger Isobel at the Fashion Valley Mall where Isobel was busy working for the Save the Children fund.

I'll let you clean up your spit-take....

Aside from the fact Santana (on the right) marveled at how slim the chances were they'd meet -- Santana admitted the mall was not the closest to her, but it ended up having the Apple Store she needed to go to -- the two laughed over the meeting and took down each other's contact info.

This was back in September. Since September, things have gotten freaky, and I'm not talking about the recent election.

After Santana's look-alike picture went viral on Twitter, someone found another doppelgänger of both of them.

Despite the fact Santana's parents claim there's no familial relation between the two, @allyholtt and Santana really do look exactly alike, right?

Go on, take a harder look.

I mean, come on! WHO STARTED A CLONING FACILITY AND DIDN'T TELL ANYONE?

But just when you thought these events that are straight out of "Orphan Black" -- as many people have pointed out on Twitter -- couldn't get any weirder, a fourth doppelgänger was discovered.

On top of that, someone believes these four doppelgängers look like actor Samantha Boscarino...

Not to mention another actor Auli'i Cravalho.

You know people are freaking out over how spot-on your resemblance is to five other people when "Orphan Black" retweets you.

Finally, here are all six of this mini clone army together:

As for Santana, she says she hopes to meet all six of her look-alikes,

It would be so funny for all of us to meet one day to see each other in person.

I don't know. I think I'd be too spooked to actually met with my clone IRL. Wouldn't you?

Citations: People Are Freaked By This Teen Who Met One Doppelgänger And Then Several Others Online (BuzzFeed)