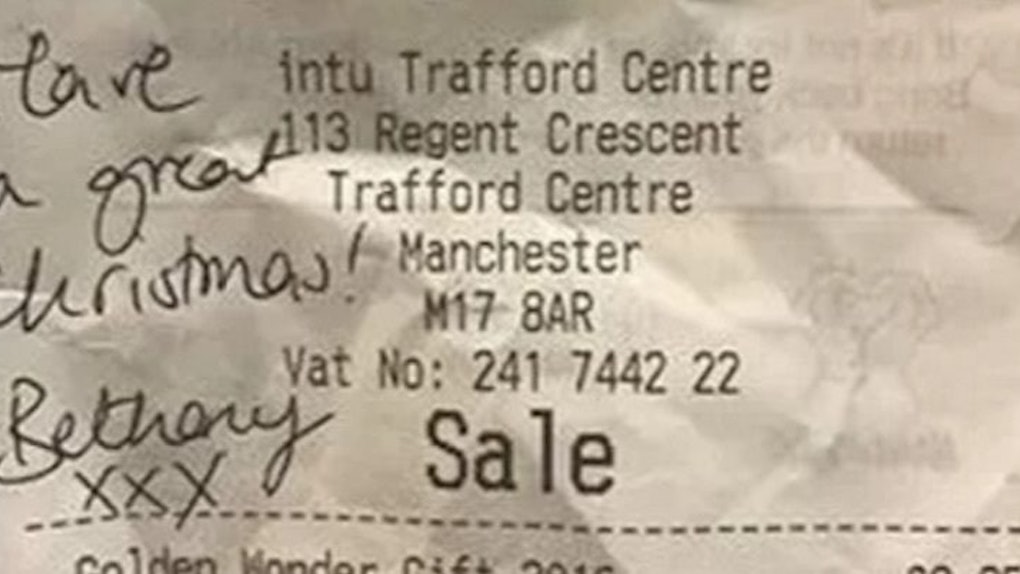 Mom's Post To Stranger Who Paid Her Bill Goes Viral

Guys! Guess what! Nice people do still exist, and a woman in London just proved it after paying for a stranger's Christmas presents when her card was declined.

Jemma Evans, mother-of-two, was ready to purchase about $53 worth of Lush products at a store in Trafford Centre, Manchester, when her card was refused two times, Metro reports.

To solve the ever-so-annoying issue that we all know too well, Jemma tried to take money out of the ATM and was taken aback when she returned to the store.

Apparently, a stranger named Bethany paid for her entire purchase while she was gone.

On the receipt, the Santa-like woman wrote,

Alas, kind humans exist. This year may have been a tad brutal, but people like Bethany give us hope there's still good left in the world.

Jemma was so surprised by the random act of kindness that she set out to find "Bethany" via social media. Of course, the tactic worked, and she was able to track down her Christmas present savior, Bethany MacDonald.

In a Facebook post, Jemma publicly thanked the woman for paying for her presents while she was at the ATM which was allegedly located 10 minutes away. A woman named Zara Chowdhury shared the post to the the Trafford Centre's Facebook page, where it was shared more than 7,000 times since, according to Huffington Post.

According to Metro, Jemma said,

No stranger has ever done anything that nice for me. I'd only just started shopping, but when I got to the till my card was declined a few times, so I was calling my bank but it still wouldn't go through. So I left it with the woman at the counter so I could go to the cash machine a few minutes away. When I got back it was paid for.

Talk about a Christmas miracle.

Thanks to Bethany, Jemma's gift recipient will have an amazing holiday filled with colorful bath bombs and deliciously smelling Lush soaps.