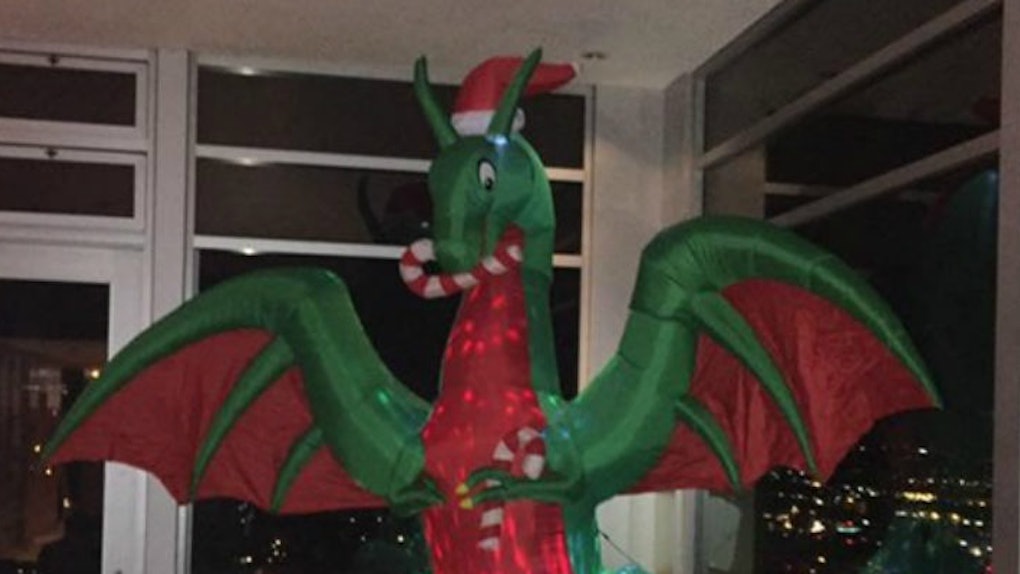 There's isn't a lot to do in my hometown and every year, my friends and I find ourselves home visiting for the holidays at the same place in the same way:

Drunk at the mall.

We've bought sweatshirts with presidents on them, purchased "tampons" that hide alcoholic shots from novelty stores and thrown down cash at a knockoff Benihana, screaming at onion volcanos.

Redditor SnapeProbDiedAVirgin outdid us, though, when he chose to get stoned before purchasing his Christmas tree and ending up with this in his girlfriend's apartment instead...

If you were worried about SnapeProbDiedAVirgin, he's from LA -- so no laws were broken when he chose to toke it on up.

He also took an Uber instead of driving straight into the inflatable section of a Home Depot or wherever he got this majestic beast.

I can only imagine what excuse he gave his girlfriend for coming home with an inflatable dragon instead of a tree..

After some internet-searching (I literally just googled "Christmas dragon inflatable"), I found a listing on Home Depot for about $130.

This 9-foot tall dragon, who I just named Marmalade, could be your new Christmas tradition.

Sadly, according to the FAQ, the wings on Marmalade do not flap. I repeat, Marmalade has no flapping wings.

A bit of the magic is lost, but if you can't believe at Christmas time, when can you?

Why do we put up Christmas trees anyway? Because of some Pagans who used the branches of Evergreen trees in their home to help remind them of spring?

I say we allow the green scales of Marmalade the Christmas Dragon to remind us of warmer weather by imagining the warm flames it can shoot out of its mouth at your enemies.