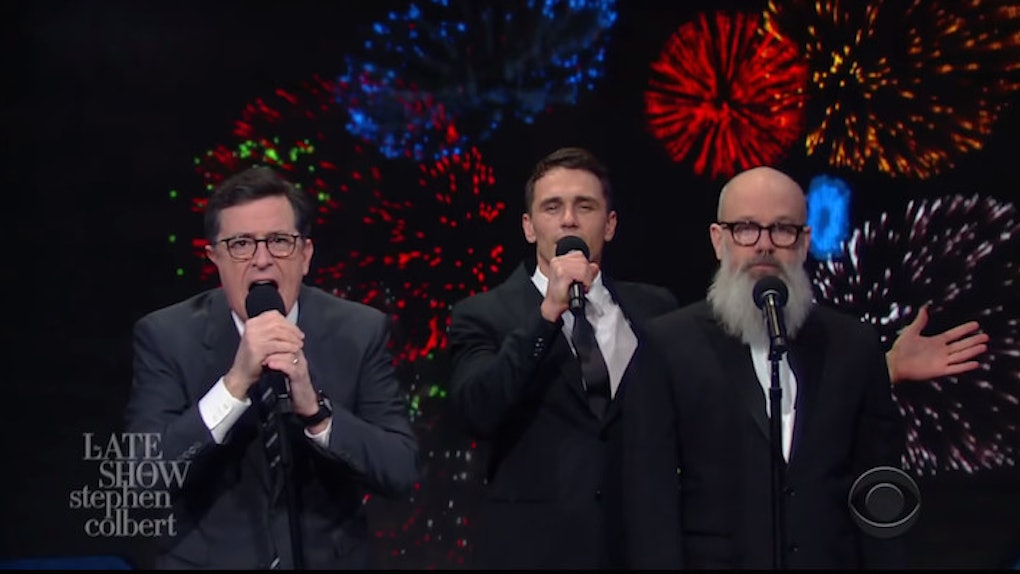 Steven Colbert decided to ring in the new year by saying goodbye to the last one.

Now, as we all know, 2016 was the annual equivalent of a 5-foot-long tapeworm nasal extraction (please watch this video for a dramatic reenactment of this metaphor), and Colbert took it upon himself to remind us exactly how terrible it was.

When you list all the terrible crap back to back, you really get a clear view of just how much diarrhea 2016 hurled at us.

"Oh great, it starts with an outbreak / Zika and Harambe / Lead is in the water main."

The rest follows this basic pattern, although there are occasional points of light.

For example, the quick flash of Pikachu's innocent wave below. Though on second thought, considering the year we just had, it's starting to look like a Nazi salute.

Michael Stipe, for the majority of the song, just stands there, refusing to join in.

The central joke is that Colbert is trying to get him to say "and I feel fine" in the chorus, but he won't. Because he does not feel fine.

No one feels fine.

You said you'd save us, Bernie. You promised you'd make things OK.

THINGS ARE NOT OK.

I guess giving up and giving in provides its own particular brand of anesthetizing pleasure.

Oh, and then James Franco arrives for no reason.

And somehow, for some reason, I'm very happy to see his familiar wolfish, is-he-or-is-he-not-always-stoned face.

It is one constant, in this hectic world.

Save us, Franco. We are in your hands, once again.