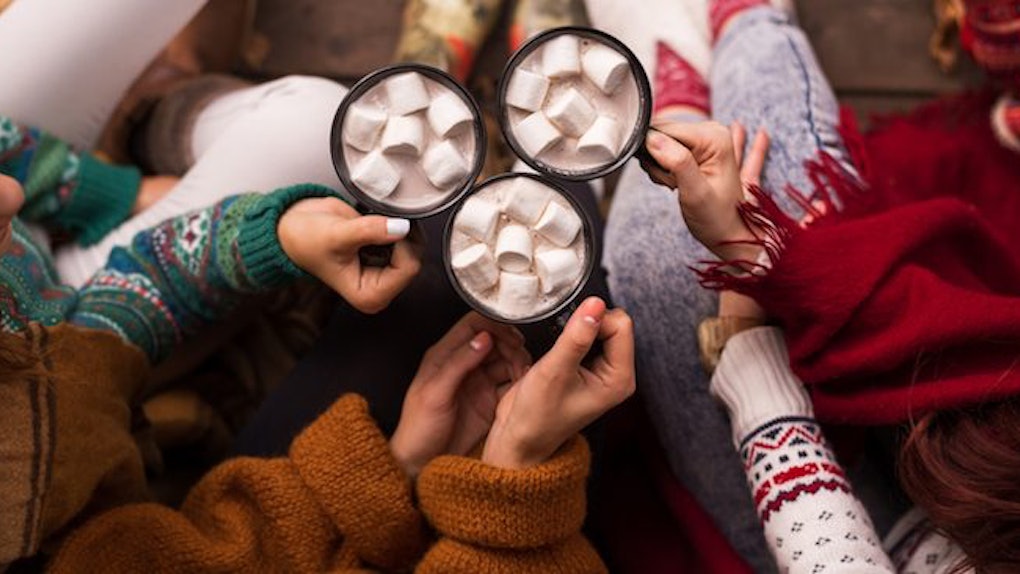 Alcohol-Infused Marshmallows Exist But They Might Be Hard To Get

If you're already into double digits of your PSL indulgence since its release, you might be looking for a new way to shake up your fall beverages. With cooler temps becoming the norm, you probably want to keep it toasty, though. Well, look no further than these alcohol-infused marshmallows to help take your hot chocolate to the next level this season.

According to PopSugar, you'll want to head on over to The Naked Marshmallow Co., which is based in the UK, to browse for these boozy mallow squares that will make your bonfire the place to be this fall. These confections come in three flavors that you could easily mistake for your fav happy hour menu: Elderflower & London Gin, Espresso Martini, and Raspberry & Prosecco. I don't know about you, but an Espresso Martini marshmallow floating atop a decadent mug of hot chocolate sounds like the perfect complement to a crisp autumn evening.

OK, so you won't be getting crazy buzzed from these sweet treats (as they only contain less than three percent of gin, coffee liqueur, and Prosecco, respectively), but that just means you can double up on the marshmallows and not regret it in the morning. On their website, the company also touts its use of all-natural flavorings and colorings, so you don't have to wonder how your Raspberry & Prosecco got its beautiful pink hue. One package of the tipsy treat goes for £5.95 (about U.S. $7).

Now, if you're stateside, you can only browse the goodies online, because the company doesn't ship to the United States yet. Hey, just look at it as an excuse to get in touch with your pals across the pond and see if they're willing to order some and send them your way. You could even work out a trade because the UK isn't the only place where marshmallows are getting an upgrade.

According to Cosmopolitan, a U.S.-based confectionery has debuted Butterbeer Marshmallows. According to its website, XO Marshmallow is a Chicago-based "Cafe + Wonderland," and it's creating delicious and unique marshmallow flavors.

To achieve its latest magical marshmallow flavor, XO Marshmallow uses its very own butterbeer sauce, which the company showcased on Instagram, and Cosmo reports that it "tastes like butterscotch + rum + perfection!" Now, it might taste like rum, but there isn't actually any alcohol in these perfect hot chocolate toppers, so that magical feeling you get once you take a bite won't leave you with a pounding headache the next morning. Plus, you can indulge in these treats (as you swap Sorting Hat stories) with your fav niece or nephew who enjoys the wizarding world just as much as you do.

You can buy this Hogwarts-inspired craving for just under $8 dollars, but shipping to the UK could be up to $29 (about £24), so make sure you offer up a butterbeer marshmallow trade to your best UK pals. You'll have to get them soon, though, because they are only on sale as September's flavor of the month. So stock up, because there is no better way to fuel up for your next Quidditch match than with a butterbeer marshmallow.

If you happen to be in Chicago, you can also stop by the company's brick and mortar location to try its in-store offerings, such as a Toasted Marshmallow Latte or XO Marshmallow's take on an affogato, which is described on its website as, "espresso poured over 2 gourmet marshmallows!"

Now that you know your hot chocolate game is on point, you can branch out and use these gooey goodies to create the best out-of-this-world s'mores that will have you hoping bonfire season never comes to an end.