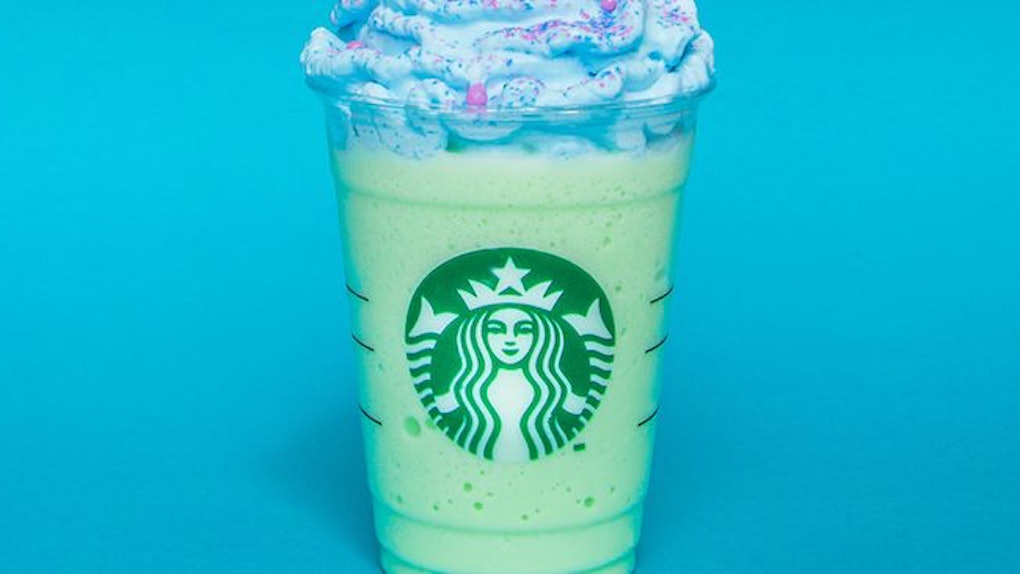 What Is The Starbucks Mermaid Frappuccino? The Drink Was Inspired By This One Detail

Have you ever found yourself enjoying your beloved Starbucks only to catch a glimpse of their famed logo on your cup and wonder what it has to do with coffee? I mean, you see her all the time. She's officially called the Starbucks siren, and now she can add drink inspiration to her resume. In fact, the Mermaid Frappuccino that's now exclusively available in Starbucks stores in Mexico was inspired by the siren.

So, what is the Starbucks Mermaid Frappuccino? Better yet, who exactly is this siren? According to Starbucks, she's a super mermaid because she has two tails (and she's inspiring tasty drinks). In 1971, after the founders landed on the name "Starbucks" (which happened to be inspired by Moby Dick), they came across her image in an old marine book and felt liked the nautical tie in to the name.

Apparently, the sea isn't as far removed from your coffee as you might've thought. After all, the founding city of Seattle is a major port city (and the home to Starbucks' headquarters), and your caffeine fix is often delivered over long distances across the water.

Back to the beverage at hand, though. Besides being totally vibrant and Instagram-worthy, the Mermaid Frappuccino is a real treat. It's made with a green melon crème frappuccino, and is topped with blue vanilla whipped cream, blue and pink sugar crystals, and iridescent violet pearls. Basically, this drink was created for "treat yourself" days and I am here for it. It is currently only available in Mexico because the US stores do not have the ingredients needed to whip up this colorful bev.

Starbucks is known for whipping up interesting creations (re: Unicorn Frappuccino), and baristas love to get creative with them. If you're going to grab your passport to indulge in the official Mermaid Frappuccino, make sure you check out other Starbucks creations exclusive to Mexico, such as the Churro Frappuccino, the Cornbread Frappuccino, and the Taro Frappuccino.