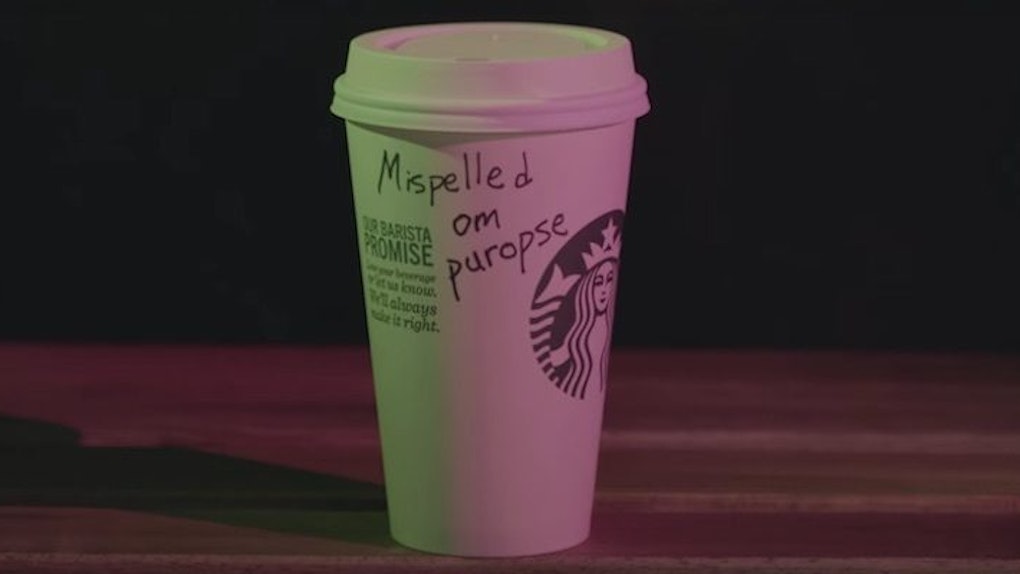 Have you ever wondered why Starbucks gets your name wrong every damn time you order a cup of coffee?

Seriously... no matter what your name is, how many syllables there are or how it's pronounced, baristas always tend to misspell it.

Whether they chose to leave a letter out or butcher it entirely, they usually send you walking out of Starbucks with a new identity based off the scribbled name written on your cup.

Sure, the mistakes are typically seen by costumers as simple misconceptions that are mocked on social media with witty Instagram posts and funny tweets -- but have you ever looked a bit deeper into the name mistakes?

If not, I'm about to turn your coffee lovin' world upside down.

According to DailyMail.com, a YouTube video was recently posted by Super Deluxe exploring a conspiracy theory saying Starbucks employees spell your names wrong on purpose.

It sounds silly, I know. But after hearing the possible reasons baristas are consistently making name mistakes, it all makes perfect sense.

See? We've all fallen victim to the Starbucks name game, and the winner is clearly them.

In the video, the mind-boggling theory suggests Starbucks baristas spell your names wrong so you take photos of the incorrect names and post them to social media.

In order to help prove the theory true, an employee of Super Deluxe named Molly walks into five Starbucks stores to see how each barista would spell her name (which is simple, mind you).

Unsurprisingly, almost every Starbucks employee spells her name wrong; she gets "Molly," "Molli," "Mali" and "Mommy."

At that moment, everything starts to make sense.

The narrator begins to explain how Starbucks is the "largest coffee chain in the world" and how millions of customers have their names misspelled every single day.

In the video, he says,

They take pictures of their butchered names and post them on Facebook, Instagram, Tumbler, wherever. And what do all these pictures have in common? Two things: a misspelled name and that familiar green siren, staring at you with her all-knowing gaze.

I have the chills.

He's right, though. Whenever my friends post their Starbucks coffees on account of their misspelled names, I automatically feel the need to go out and buy a cup of my own.

At least now, I'm aware I'm a part of Starbucks' never-ending cycle of free advertising via social media, but that still won't stop me from buying a pumpkin spice latte.

I surrender, Starbucks. YOU WIN.