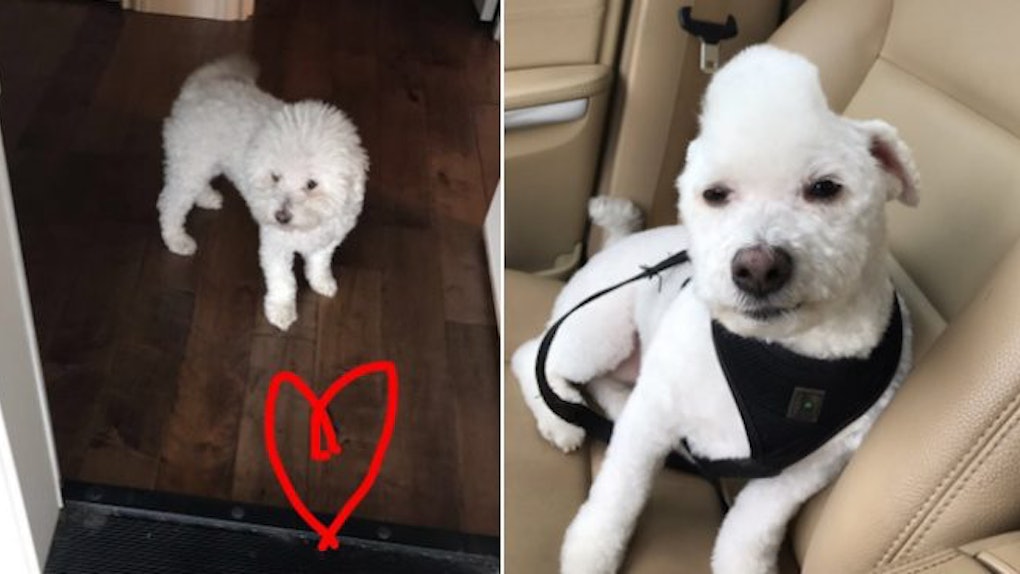 This is further proof dads are not to be trusted when it comes to anything and everything having to do with hair.

Seriously, I still partially blame my dad for my frizzy, dead mess of a mop on my head, since he played a pretty large part in styling it throughout my childhood. We broke countless combs and snapped several hair ties back in those days.

So, it's really no surprise at all this dad royally screwed up his dog's haircut.

Beau Braden, 17, lives in Vancouver, Washington with his family, including their floof of a dog, Cooper.

When Cooper needs to be groomed, his dad, Jody, is usually the one who takes him.

But the last time Jody took Cooper for a trim, he told the groomer to give the floof a "new look."

According to Mashable, Beau explained,

We didn't even know he was taking him to get a haircut. He told the girl to have fun with it, then sent that picture in our family group chat.

Let's take a closer look at those before and after shots.

You could say he really screwed the pooch on this one (I know, I hate me, too).

Twitter, of course, roasted the hell out of Cooper's new look.

The obvious, but still hilarious, Mr. T comparisons were ruthless.

Ugh, except it's not a prank. Poor little floofy!

Cooper's disappointment with his new look is practically palpable.

At least he's not alone?

JODY, YOUR FAMILY TRUSTED YOU.

But would it be enough to salvage that mess?

While the Braden fam is still pretty mortified, Jody stands by the new look, calling it "awesome."

Apparently, Beau's sister was so embarrassed by Cooper's haircut, she took matters into her own hands and shaved the lopsided 'do clean off.

[My sister] couldn't look at him anymore so she took my dad's clippers and shaved it off.

Citations: This Dad Gave Their Family's Dog A “Mohawk” Haircut And Everyone Is Horrified (BuzzFeed News), Fun dad allows family dog to get a very unfortunate haircut (Mashable)