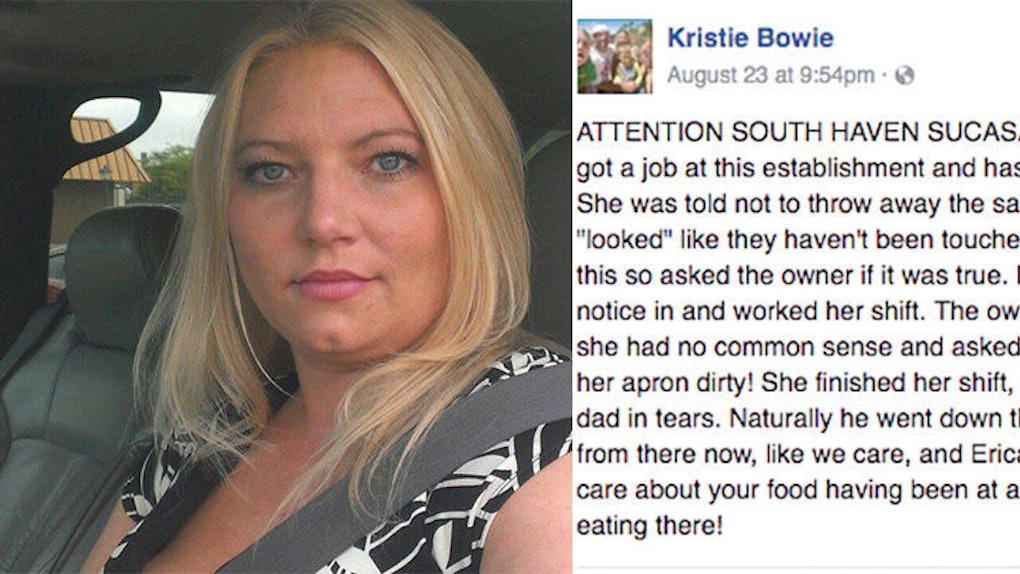 A Mexican restaurant was outed by one its own employees for its disgusting practice of reusing old food.

Kristie Bowie says her 16-year-old daughter, who used to work at the Su Casa Restaurante in South Haven, Michigan, told her all about the establishment's disturbing policy with salsa and chips.

She was told not to throw away the salsa, chips, etc that come back that 'looked' like they haven't been touched! She did not feel comfortable with this so asked the owner if it was true. He said is was true so she put her notice in and worked her shift.

The post, which Bowie (pictured above) posted last week, garnered over 1,000 likes and over 800 comments. In it, the mother also says the owner of the restaurant took a shot at her daughter for speaking up about the issue.

The owner belittled my daughter telling her she had no common sense and asked her if she is such a clean freak why is her apron dirty! She finished her shift, like a trooper, then left and called her dad in tears.

An investigation from local station WWMT news found that the same owner was a habitual offender of health standards.

They will have used meat out and just hang it back up after the health department tells them to take it down. They will put it right back up as soon as they leave.

The owner, Edgar Saurez, even admitted to what Bowie accused his restaurant of doing. Suarez told WWMT,

I thought it was OK, but the health department said, 'It's not possible, you cannot do that.'

The owner says he'll be more careful in the future, which we're sure is reassuring to everyone.

Meanwhile, his restaurant remains open while awaiting another check-up from the health department.