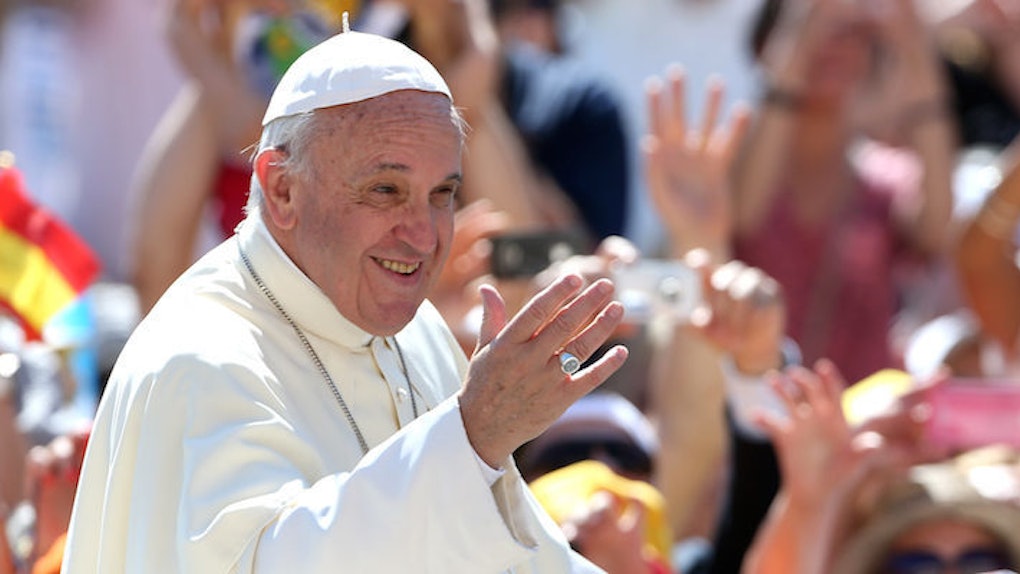 America is turning up for Pope Francis’ first visit to the States. People of all ages, ethnicities, faiths and backgrounds have great respect for Jorge Mario Bergoglio.

Pope Francis has won the hearts of Millennials for obvious reasons.

Here are 14 reasons Pope Francis is the coolest:

Yes, it’s true! Pope Francis was a bouncer at a Buenos Aires nightclub while he was in college. He knows the struggle of working menial jobs to get by while in school. It's very reassuring to know the Pope can probably kick some butt.

The Pope knows how to tango. Prior to his religious vocations, one of his favorite activities with his girlfriend was going out dancing.

I’m pretty sure Pope Francis would school most of us in a dance battle. And he clearly would win “Dancing With The Stars.”

The Pope chose his papal name after St. Francis, the patron saint of animals and the ecology. A big animal lover himself, he has said humans and animals interrelated.

The Pope is big fan of soccer. His favorite team is the San Lorenzo Football Club. Can you imagine Pope Francis screaming, "Goal!"

Red wine is a favorite of the Pope. He was sipping on Malbec way before most of us were born. Trinitas Cellars even made a special “Cabernet FRANCis” named after Pope Francis.

According to the Huffington Post, Pope Francis asked for seconds:

And then came a call from a Vatican butler: The pope drank his at lunch and liked it so much, he’d like some more, please. Tim Busch made a round of calls, and those friends who had not already downed theirs were glad to hand them over to the pontiff.

The Pope will be cruising around in the states with a pope-ed out Jeep Wrangler. I wonder if he could sign my 90s Barbie Jeep?

@Pontifex is an avid tweeter. His tweets consist of positivity, humbleness, graciousness, food for thought and reminders of God’s love.

All the proceeds went to benefit a hostel and soup kitchen in Rome.

9. But First, Let Us Take A Selfie

The Pope knows his angles and the value of good lighting. He is popular for taking selfies.

You have to make sure his pontiff ends up on your Snapchat. What could be his favorite filters? X-Pro II, Earlybird, Amaro, Valencia or 1977?

Pope Francis is the first Latin-American to ever become elected Pope. Is it a coincidence that his first-ever visit to America is during National Hispanic Heritage Month?

11. The Queen of Pop Digs the Pope

Madonna is into Pope Francis. Despite her anti-Catholic antics in the past, she wants to kick it with his Papal Highness:

God bless Pope Francis. We've got to meet. A plate of pasta, a bottle of good wine. Do I have a chance?

You may catch a glimpse of the Pope riding the L, 6 or A in the city this week. He is known for taking public transportation rather than being chauffeured.

The Pope is uber positive. He promotes peace and love to all. He is not a fan of gossip, either.

From washing and kissing the feet of AIDS patients to playing with children in the streets, he is a Pope of the people, for the people.

Let’s be real: We all want to be BFFs with the Pope on his US visit. And some of us just want to share a Coke with him.

Many celebrities may get that chance. Jennifer Hudson, Gloria Estefan, Mark Wahlberg, Jim Gaffigan, The Fray and Aretha Franklin will be celebrating with the Pope in NYC and Philadelphia the next coming days.

Sign me up for that Mass! Don't forget to sweep up some epic Pope Francis souvenirs!