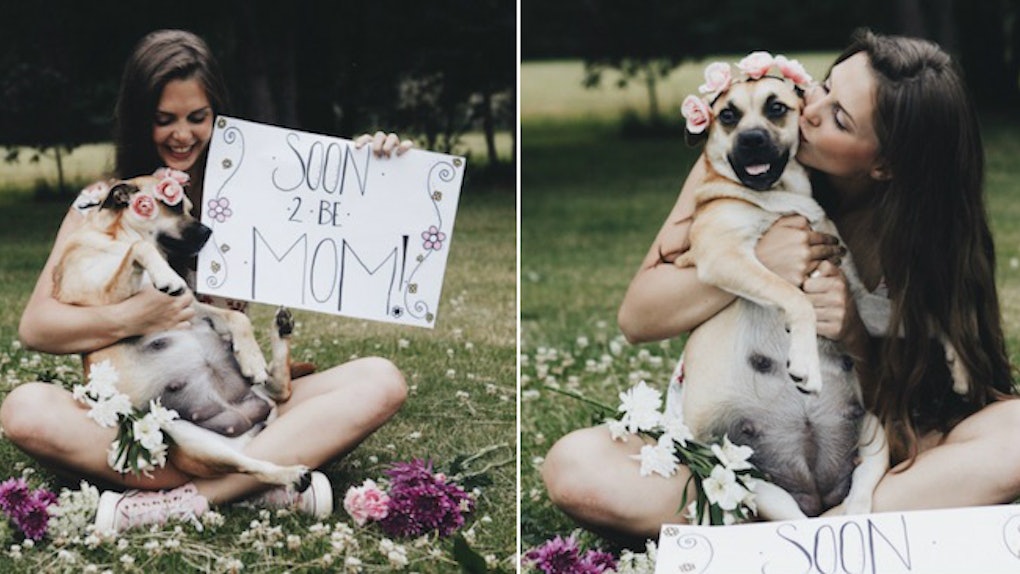 Pregnant Dog Has Maternity Photoshoot And Twitter Loves It

I don't know about you, but ever since I entered my mid-20's, my Facebook timeline is filled with lots of pregnancy announcements, gender reveals, and maternity shoots.

I react with the "love" icon whenever I see them, but to be completely honest, a dog named Fusee just stole the pregnancy spotlight with her pre-birth photos.

On Monday, June 26, Fusee's owner, Elsa, shared the photos from their mini maternity photoshoot on Twitter.

"My bestfriend is 8 weeks pregnant so we decided to do a maternity photo shoot," she captioned a set of four heart-melting snapshots captured by her photographer friend, 19-year-old Clayton Foshaug.

In the photos, Fusee, a pug mix, sports a dainty rose flower crown as she poses for the camera alongside her BFF, Elsa, who holds a sign that reads, "Soon 2 Be Mom." She smooches her dog's furry cheek and looks super proud of the pregnant pup.

I cannot handle the cuteness, and neither can the rest of Twitter.

We love you, Fusee.

Seriously though, her adorable belly looked ready to pop at eight weeks.

And like the cherry atop her newfound fame, Fusee gave birth on June 28, Elsa announced via Twitter.

She welcomed a total of eight puppies after going into labor.

Many commenters on Elsa's initial post suggested she get Fusee spayed after her delivery.

It's not a bad idea considering, according to PETA, "Just one unaltered female dog and her offspring can produce 67,000 puppies in only six years." That's a lot of puppies.

It's simply impossible to keep up with those numbers and give every animal a forever home.

All spay talk aside, here's to hoping Fusee makes a full recovery and that her babies are healthy and happy with their mama!

If I had eight newborn puppies in my house, I think I would cancel adulthood and spend all my time with them.