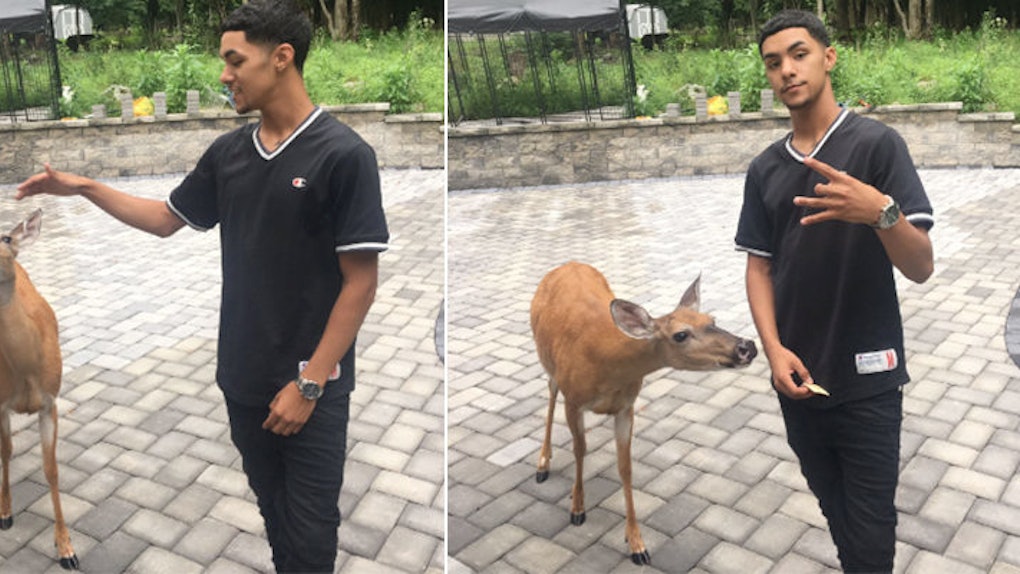 On Tuesday morning, Kelvin Peña's posted a video of his friend's "BM" coming over for a visit.

And if you're now wondering "what," the answer to that question is "Money," Kelvin's "pet" deer.

In keeping with this streak of sentences that a very reasonable person could find confusing, here's something else that might make just as little sense: Kelvin's video with Money's "family."

Yes, this guy has, in fact, become best friends with the deer around his Pennsylvania home, and he's becoming famous for it. His numerous videos are getting tens of thousands of retweets and multiple outlets are writing about his story.

That story appears to have begun on with this video.

WHERE IT ALL STARTED pic.twitter.com/wEJL6d1yoS — Common White Girl (@girlposts) August 3, 2016

Since that moment, it looks like Kelvin really is a part of the deer family.

They even play basketball together.

Ya tu sabe me and Canela counting up pic.twitter.com/vm7gFTZBKd — Kelvin (@COLDGAMEKELV) August 2, 2016

And, of course, now other people want to be like him.

But there's no telling if those people will have the same bond.

They're not scared of me. That's why we have a connection.

That bond will probably get strong after he starts, you know, feeding them something they're actually used to eating.

And that's great because you know what they say: A family that eats together gets retweets together, or something like that.