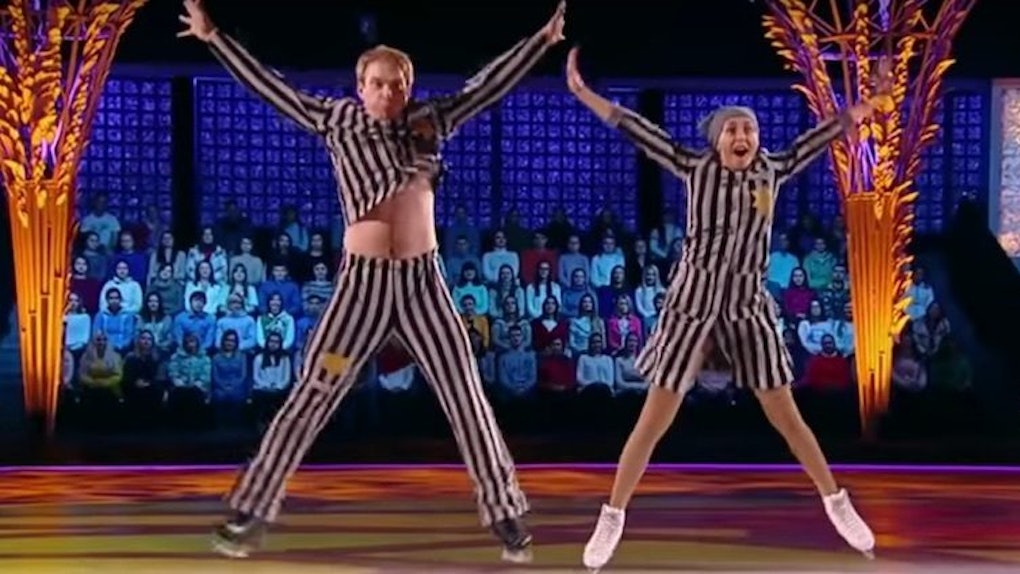 If there's one thing you should never, ever reenact with a smile, it's the Holocaust.

I don't care whether you're trying to celebrate "human dignity" or educate the youth. Dancing in a Nazi death camp uniform is plain ol' messed up.

Needless to say, people were pissed.

Navka and her partner, Andrey Burkovsky, wore striped concentration camp getups with gold Stars of David while skating to a routine they say was inspired by the movie "Life Is Beautiful."

The 1997 film allegedly portrays a Jewish couple that is separated during World War II after being relocated to a concentration camp.

There, the main character tries to shield his son from the horrors of the Holocaust by pretending it's all a game.

During Navka and Burkovsky's routine, they danced to the song "Beautiful That Way" by Achinoam Nini, and reenacted scenes that portrayed the couple's time spent at a concentration camp together.

They smiled and ended their dance with a scene where Navka held an imaginary baby in her arms while Burkovsky disappeared to the sound of a machine gun.

It was... shocking, to say the least.

Her description reportedly translates to,

You must show this movie to your children. Our children need to know and remember that terrible time, which I hope, God willing, they will never know.

According to RT, she also spoke with the Komsomolskaya Pravda newspaper and said,

This isn't just a TV show. This is theater. And such issues must be raised. People must remember about it. And if the youths will now show interest and try to learn about the Holocaust, concentration camps and "The Life Is Beautiful" movie, it would mean that we've hit the mark [with our performance].

It's apparent Navka's intentions were not to offend, but she and her partner probably should've thought twice before reenacting scenes from the Holocaust with a smile on their faces.

Concentration camps were not "beautiful," and they certainly weren't entertaining — so why even try to put such a horrific event in such a positive light?