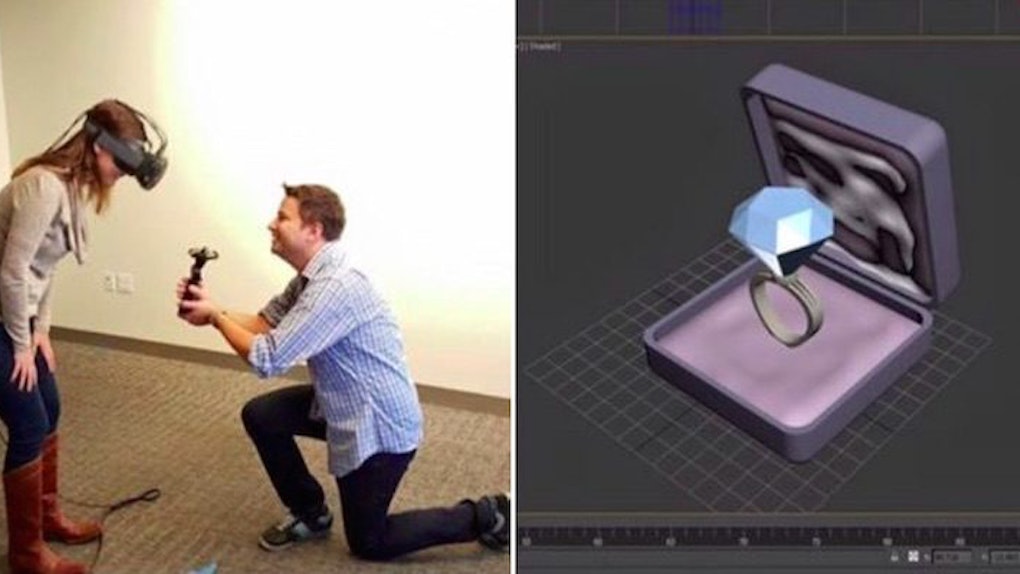 Guy Proposes To GF Through Virtual Reality And It's Seriously Adorable

Ladies and gentlemen, it finally happened.

A man actually proposed to his girlfriend through virtual reality.

According to TIME, Chandler Murch invited his now-fiancée, Kelly Tortorice, to visit him at Valve Corporation where he works. Murch told Tortorice he was testing out a new virtual reality headset and needed her help.

So there I was, typical day… on a sunken ship deck; fixing robots; painting three-dimensional fire; walking through the Alps; and then suddenly, a virtual engagement ring started floating my way. Chandler told me to grab it. Then told me to take off my headset, and there he really was, on one knee, with a real ring.

But, the real question is, did Tortorice say "yes"?

But I didn't say yes. I said, 'OF COURSE I WILL MARRY YOU!' Thank you for such a hilarious and fun surprise.

Isn't that sweet? Expect the unexpected, even in the pixelated world of virtual reality!

So there I was, typical day...on a sunken ship deck; fixing robots; painting three-dimensional fire; walking through the... Posted by Kelly Tortorice on Thursday, 1 October 2015