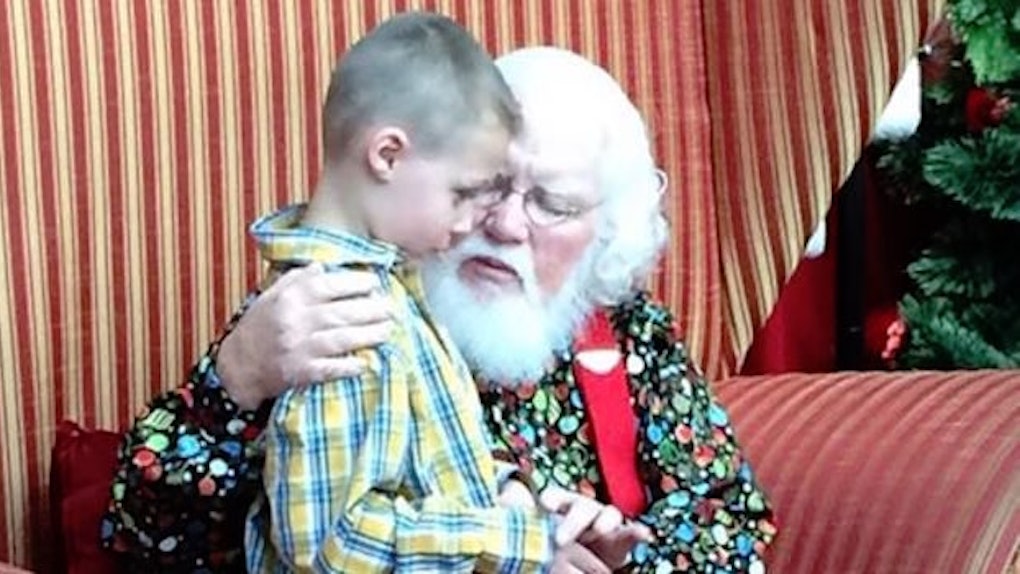 This Santa's Conversation With An Autistic Boy Will Warm Your Heart

The mall Santas of 2015 are proving themselves to be actual saints of Dutch holiday legend.

When a child with special needs named Landon went to sit on Santa's lap at the RiverTown Crossings mall in Grandville, Michigan, the man in red gave Landon a gift most people never afforded him.

The 6-year-old's mother, Naomi Johnson, posted a photo of Landon and Santa on Facebook and shared her son's story.

I had an AMAZING experience [with] the Santa at the RiverTown Crossings Mall and I want to share my story with you: My child is amazing! He has his quirks and drives me bonkers, but he is amazing! The other day he went to see Santa [with] the cousins. He said his peace to the old man in red and walked away. While aunt Brittany waited for pictures to print, he went back to Santa [because] he wanted to tell him that he has autism. He was flapping his hands, all excited to let Santa know that he has autism. Santa sat him next to him and took L's hands in his and started rubbing them, calming them down. Santa asked L if it bothered him, having autism? L said yes, sometimes. Then Santa told him it shouldn't. It shouldn't bother him to be who he is. L told Santa that sometimes he gets in trouble at school and it's hard for people to understand that he has autism, and that he's not a naughty boy. Santa told L to not worry and that he has been a very good boy being who he is. They sat, and chatted for at least 5 mins. Santa payed close attention and listened to him. This just melts this momma's heart! My child is a great advocate for himself. But this day was different. He opened up to this person about who he was and he was accepted. He wasn't a science experiment, like he gets treated when most people find out he autistic. He was Landon, sitting with Santa and being told that it was OK to be himself. Mommy tells him all the time that he's special and I love him the way he was made, but it's always nice to hear it from others. To be told that it's ok to be who he is. We have met a lot of amazing people in our autism journey, but this one made the top of the list. Shout out to the Santa at the RiverTown Crossings Mall. You.are.AMAZING!

In an interview with BuzzFeed, Naomi praised her son's intelligence, explaining Landon is “extremely smart.”

He is reading at a 3-4 grade level, loves learning, and hopes to be an astronaut who designs video games when he grows up.

Naomi was especially pleased to learn Santa told Landon he was “a very good boy.”

[Naughty is] not something I will ever use to describe my child and I don't want him to think he is [by] any means. But society looks at children who have behavior issues as 'naughty' and strangers have told him before that he is naughty.

I think that I gave hope that we can bring our children out into the public eye and they will be accepted as who they are. I have shared my experience of good and shown that there is still greatness out there in this world… A kind soul in a red suit that told my son that he was loved and it was OK to be who he is. It's the best message out there next to peace on Earth!

As for Santa, he assured BuzzFeed all children with special needs deserve the love and happiness enjoyed by children without such differences.

Every child is loved and appreciated -- and they are all important!… Every child deserves nice presents… Santa loves you all. Makes sure you're all in bed on time so Santa can visit you. If you hear a noise on the roof, don't worry -- it's just me. And Rudolph says Hi.

Citations: This Story Of A Mall Santa And An Autistic Boy Will Melt Your Heart (BuzzFeed)