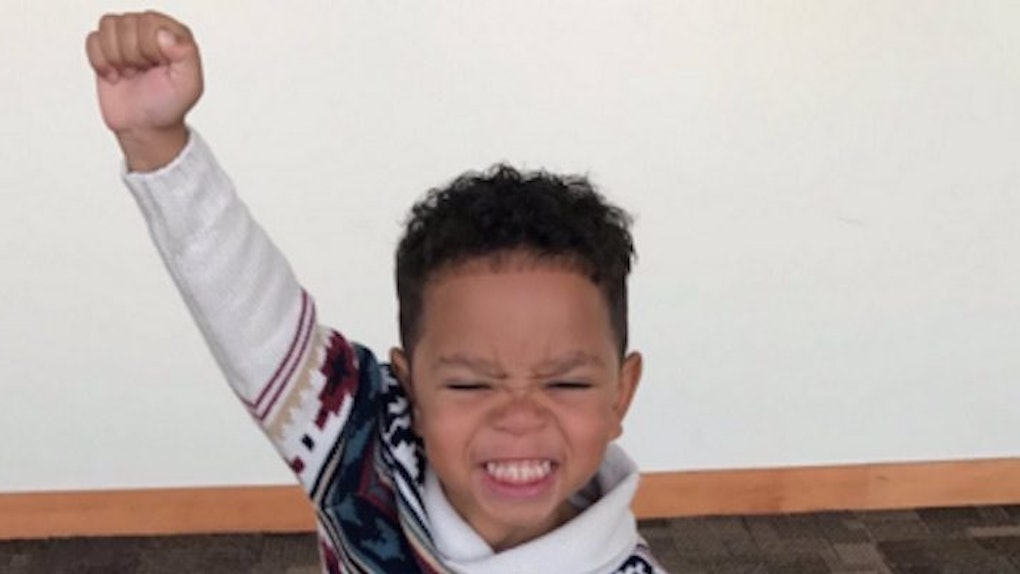 After 832 days in foster care, Michael Brown was adopted by a family that loves him dearly.

The Brown family -- who ironically have the same last name as Michael -- took him under their wing in February 2015. On Tuesday, December 20, his adoption was final.

Michael was just a little happy about it.

The 3-year-old was so incredibly excited, he told everyone in the courthouse the big news, BuzzFeed reports.

After the deal was done, he took photos with his two adoptive sisters, Dezhianna and Jordae of Pheonix, Arizona. In the photos, they're sitting beside their new little brother, and he's in a state of pure bliss.

His smile is making me smile. In fact, it's making me sob because I'm so freakin' happy for the little dude.

In the heartwarming photo, Michael is holding a board that honors the date he was adopted by the Browns.

Some things are worth the wait. After 832 days in foster care, today, I'm adopted.

PASS ME SOME TISSUES, WILL YOU?

We're so happy for you, Michael!

If you thought you were the only one ugly crying at the sight of the family's post-adoption photos, rest assured you weren't.

Dezhianna, Michael's 17-year-old adoptive sister, posted the photos to Twitter with the caption "Forever Family," and, yes, it'll make you sob all over again, so don't put your tissues away yet.

Since she posted the photos on Tuesday, her tweet has already accumulated 125,000 likes and 49,000 retweets.

Her sister, Jordae, also tweeted in honor of Michael's adoption, showing an array of photos and videos of the happy toddler.

He was so excited on the day. I don't think he truly understood what being adopted meant. He just knew he was being adopted.

She also admitted Michael was shy upon living with their family at first, but now, he's making it clear he's glad he's there.

Now when he sleeps with me, he'll roll over in the morning and get super close to my face and say, 'Dae, I so happy.'

Whether or not he know the details about adoption, I'm sure he's thrilled to be welcomed into such a caring family.

They're right: Some things are worth the wait.