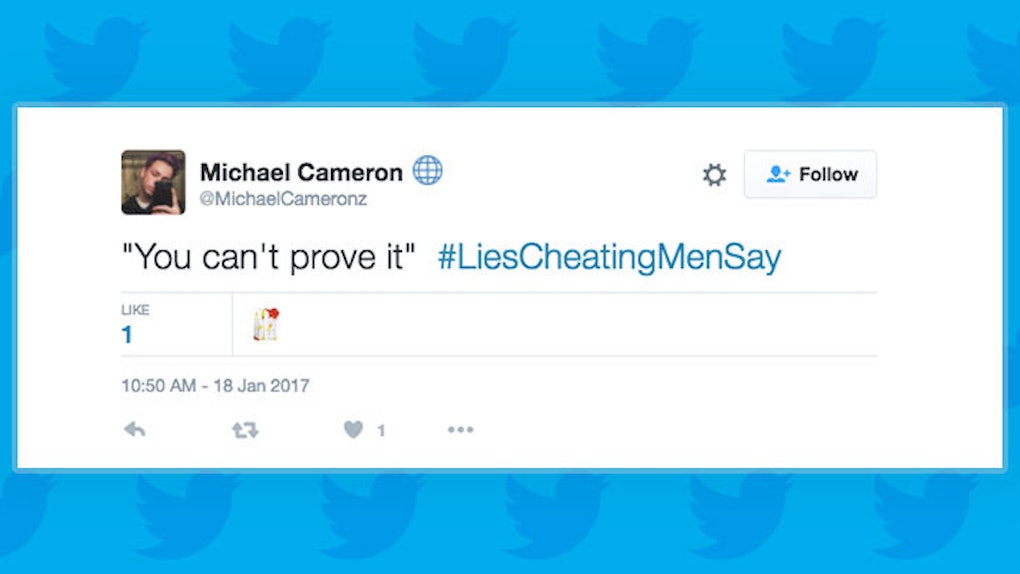 Ohhh, cheating. What a special kind of mind-fuck you are.

In the words of Queen Bey, what's worse? Being jealous, or crazy?

That's how it can feel if you suspect your boyfriend is cheating on you, when the truth is you should feel NEITHER.

There are some fool-proof clues that might tip you off, or you may be going on an intellectual hunch, but your gut is almost never wrong about something this big.

Here, Twitter breaks down #LiesCheatingMenSay to help you get to the bottom of things.

If you can never reach them...

It could be because they don't WANT you to reach them! Remember, society has reinvented itself so that our phones can almost always, always, always be charged.

Don't believe them if they tell you it was dead for four hours, fell in the ocean and then miraculously dried in a bag of rice or was found after being left in a taxi in Manhattan. They lyin'.

If they try to manipulate you...

Stick to your guns! You AREN'T crazy, so don't let them make you feel like you are. If they answer a question with a question, buckle up because you are about to board the Manipulation Express.

If they are purposefully hiding you from their social media...

It's likely they're actually hiding you from their other girlfriend.

If you think about it, no one intentionally keeps things they AREN'T embarrassed about a secret. If they are going through the effort to make sure you aren't on their news feed, it's probably because they don't want someone to see you there.

Or if they just flat-out lie to your face...

Sure she did, @LutzRemmers... and I'm actually Beyoncé.

If it sounds like a lie, it probably is a lie. Especially some of these humdingers.

Moral of the story? If it walks, talks and quacks like a cheater, it's a cheater.