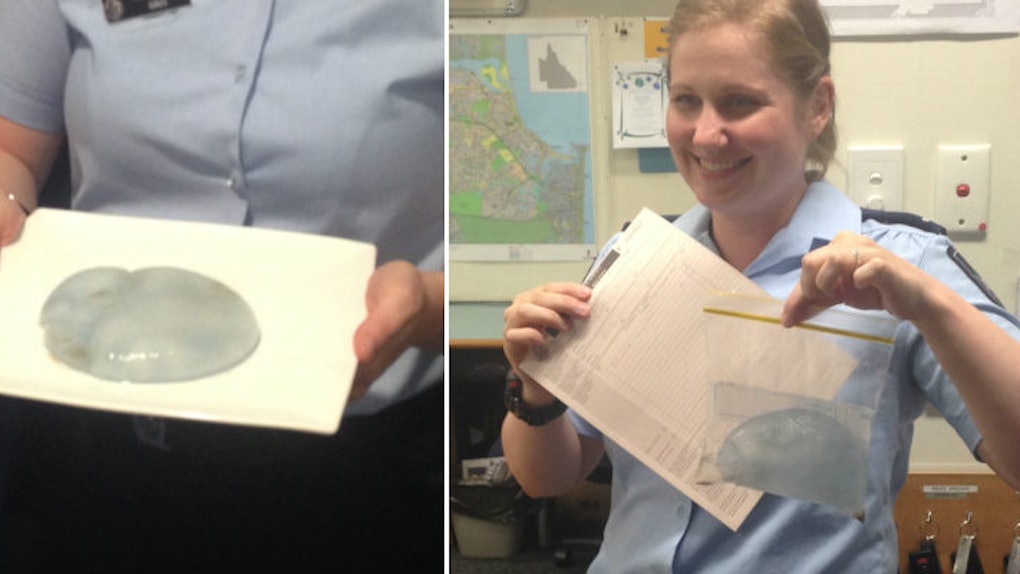 Guy Turns In Jellyfish To Police Thinking It's A Breast Implant

One concerned citizen turned in what he thought was a breast implant to police. It turned out to be just a dead jellyfish.

Cue the theme song for "Law & Order." Seriously, someone get Dick Wolf in here because boy do I have a great new idea for a TV series.

There are so many questions that need asking: Why was someone actually perturbed over potentially finding a breast implant? How does someone not recognize a jellyfish?

That's right, one Australian dude thought he had discovered some serious evidence of a person's drowning or even a murder: a fake boob, a prosthetic mammary, a faux bongo.

Even Agatha Christie can't write a mystery as juicy as this. Or as, you know, slimy.

The fine officers over at Maroochydore Station (god, what a name, right?) analyzed the, um, unidentified floating object and determined it was -- you guessed it -- a fucking deceased jellyfish.

It looks the homicide report just might have to be thrown out... unless the jellyfish in question has some sort of secret criminal past that we don't know about.

Wait, could this jellyfish be the legendary Kaiser Söze?

OK, so this is definitely not the case, but a guy can dream, can't he?

So, now that we've solved this mystery, who's going to find justice for this poor animal? Perhaps he or she (or it?) was murdered.

Honestly, it's a little bit insensitive that the full extent of the law isn't being entirely utilized to find whoever murdered this poor creature.

In terms of weird news, this has been but the tip of the iceberg this week.

Consider this actual "sleeping beauty" who literally fell asleep for 6 months and still managed to have a boyfriend when she woke up.

Meanwhile, I'm over here trying to get a second date like:

But this story about a boob-impersonating jellyfish? This is the strangest story I've heard about this week... compelling, but strange.

Citations: Guy makes an absolute boob of himself after handing a jellyfish in to police (Mashable)