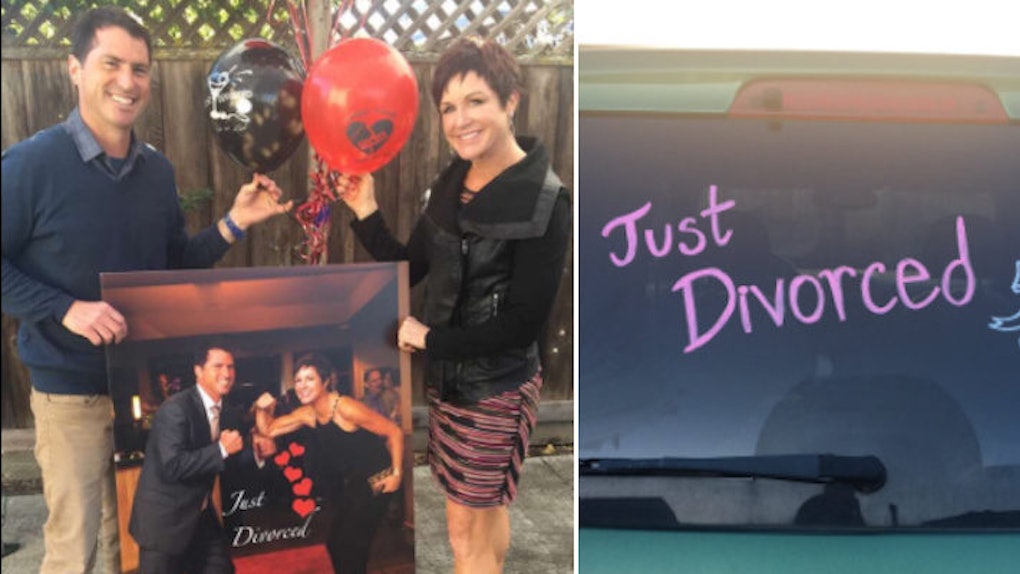 Emma Becerra's parents got a divorce.

Then, they threw a party to celebrate the divorce.

This party had everything. It had lawn signs!

They even took a twist on the classic "Just Married" car sign.

And the couple looked damn good.

Sure enough, her tweet about it went viral because, for some reason, people on the internet think it's their jobs to comment on strangers' lives all the time.

It's not hard to see the arguments on both sides of whether a divorce party is appropriate.

On the one hand, people like holding onto the concept of the sanctity of marriage and love lasting forever, and blah, blah, blah.

On the other hand, this is a great sign of continued collaboration between the former couple who indicates they are on relatively good terms, which is especially excellent since they share a child.

Personally, I love the idea of a divorce party.

I don't think we should force unhappy people to stay together, and many times, it's better for everybody involved for a couple to split amicably.

A good divorce is better than a bad marriage.

So, good on you, Emma's parents, for figuring out the best way to make it work.

Besides, divorce parties are not a new concept invented by Becerra's parents.

This was a fad covered by The New York Times back in 2011, when a New York high-class couple threw an elegant divorce party.

William Zabel, the lawyer of the then-husband, told The Times,

Many people would consider this a very civilized divorce.

A divorce party was a central plot device in the season five finale of "Gossip Girl" a year later.

In the episode, the Shepherds -- who had the infamous pre-series wedding where Serena and Nate hooked up -- throw a divorce party.

Emma's parents did it in charming style, and I salute them for it.