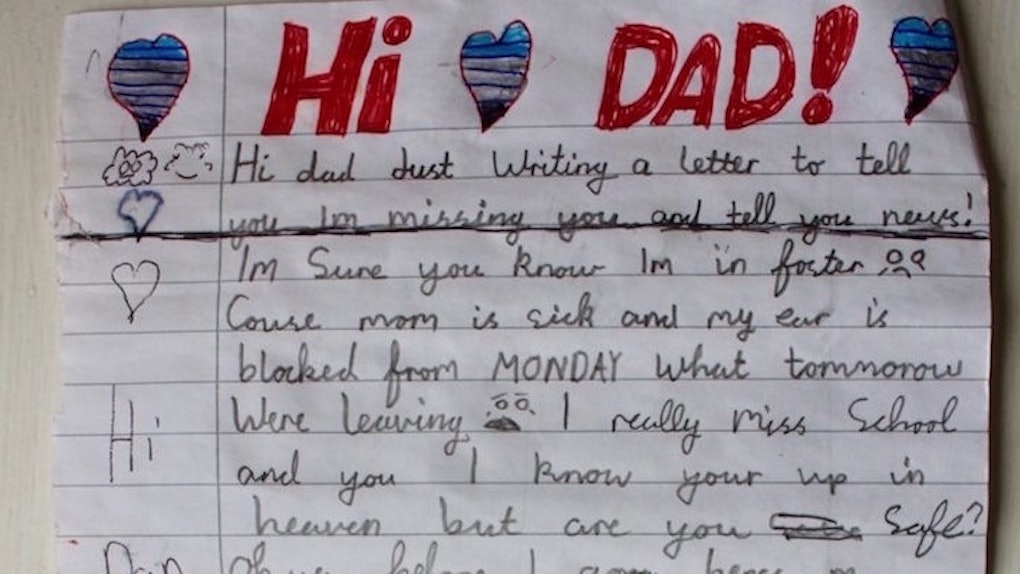 Stuart McColl made a heart-wrenching discovery while walking through a private field in Dunfermline, Scotland, on Monday.

Attached to a blue balloon, he found a letter rolled up and lying in the field. But it wasn't just any letter.

It was an emotional Christmas note written by a young girl in foster care addressed to her dead father, and it's sure to make you shed a tear or two.

In its entirety, the letter reads,

Hi dad, just writing you a letter to tell you I'm missing you and tell you news! I'm sure you know I'm in foster care cause mom is sick and my ear is blocked from Monday what. Tomorrow we're leaving. I really miss school and you. I know your up in heaven but are you safe? Oh ya before I go here's my dream and xmas list. My dream is for you my daddy to put under my pillow that you wrote. My xmas list: boots/studs, Astros, rebounder net, new Premier League ball, rubik cube, Real Madrid  jersey and shorts Bye daddy Love you

I'll give you a moment to dry your tears before we continue.

In the note, the seemingly lonely child begins by letting her father know she misses him.

Then, she makes sure to ask if he's safe and says her "dream" is for him to leave her a note under her pillow.

Shortly after, she continues and writes to him about her "dream" Christmas list.

According to her wish list, she is hoping for boots, Astros, a rebounder net, a new Premier League ball and a Real Madrid kit.

I don't know what half of those things are, but if I had the power to get them to her, along with a letter from her father, I absolutely would.

Apparently, McColl feels the same way and has already made it his mission to find the young girl who wrote this letter.

This week, he posted a photo of it to Facebook with hopes it would go viral — and, of course, it did.

Now, his entire community is involved and trying to find the Scottish youngster with a broken heart.

It's been reported by Dunfermline Press that McColl spoke about his findings and said,

This was just too sad to ignore. I've never done anything like this before but it's a really tragic story so it would be great to do something to help this person who is having such a tough time.

Unsurprisingly, the letter has become popular on social media and McColl is feeling hopeful.

He continued speaking to the press, and said,

Everyone's getting involved and we've already had people wanting to donate to get these gifts. But we just need to find this child first! They seem to really like football that's for sure!

Hopefully, the child is found just in time for Christmas so the community can help her wishes come true.

If you know the child who wrote this letter, email the Dunfermline Press at editorial@dunfermlinepress.co.uk.