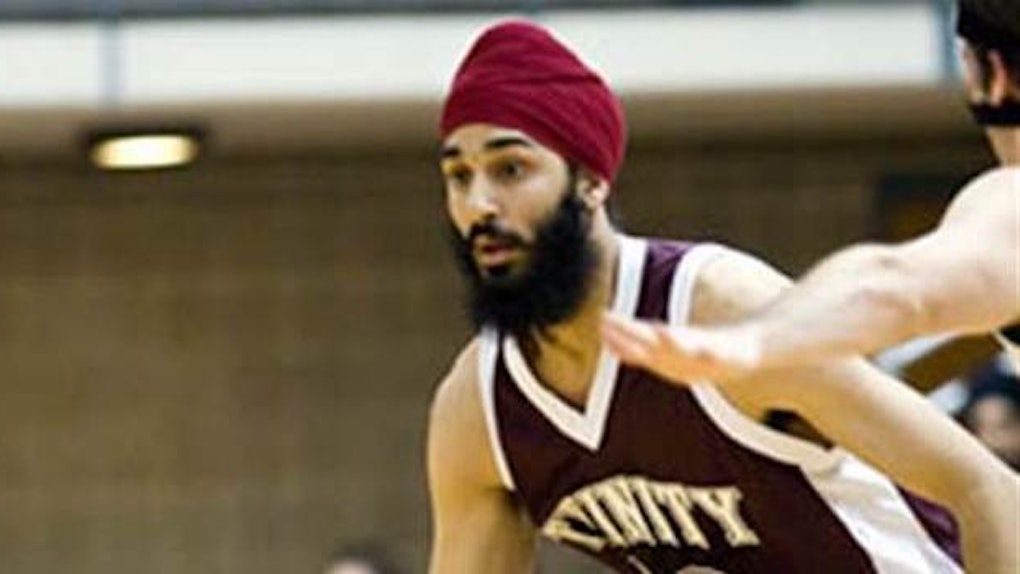 As the final month of 2015 kicked off, the insecure monsters of the Internet made sure to get their final ignorant digs out in time.

Aside from being co-captain, Singh is the NCAA's first turbaned Sikh basketball player.

In response to the racist meme, Singh's friend Greg Worthington reposted it and offered some correct background information about his pal.

Let me tell you why this shit isn't funny. I know this guy and his name's not 'Muhammad.' He's not Arab, he's Punjabi.... Posted by Greg Worthington on Saturday, December 5, 2015

I know this guy and his name's not 'Muhammad.' He's not Arab, he's Punjabi. He's not even Muslim, he's a Sikh. His name is Darsh Singh and he's a US citizen, born and bred. That jersey he's wearing in this pic, it currently sits in a Smithsonian Museum in Washington, DC… He's worked in US Intelligence with the National Security Agency in the past and currently manages financial portfolios and hedge funds for some of the most compassionate companies in the US. Above all those things, he's a really nice guy, very funny, and he's a great friend.

The response caught the attention of the Smithsonian Asian Pacific American Center, which launched #BeLikeDarsh, a campaign to highlight positive, accurate aspects of Singh's life.

Members of the online community ran with the hashtag in honor of Singh.

I want to #BeLikeDarsh because he stands against all forms of hate -- anti-Sikh, anti-Muslim, anti-black, etc. pic.twitter.com/WqlTwzm9M2 — Simran Jeet Singh (@SikhProf) December 9, 2015

I want to #BeLikeDarsh because he defies preconceived notions of what it means to be Asian American. pic.twitter.com/9843B2ztTS — Alton Wang (@altonwang) December 9, 2015

I want to #BeLikeDarsh because he is the essence of what American is. — Glen Hunt (@GlenDHunt) December 9, 2015

I want to #BeLikeDarsh because he opens the door for young children to appreciate and celebrate their differences. pic.twitter.com/pSIFLldn6n — Simran Jeet Singh (@SikhProf) December 8, 2015

Singh replied to the support on Wednesday with gratitude and advice.

Many folks have asked how they can help more than just sharing a post… Continue to educate yourself on traditions and practices that are different from your own… Serve those in need… Be kind and loving.

Singh's words were enlightening, especially considering “be kind and loving” is a common-sense notion many often forget.

Advice like this makes the decision to #BeLikeDarsh an easy one.

Citations: After This Sikh Guy Became Part Of A Racist Meme, The Internet Helped Turn Him Into A Hero (BuzzFeed)