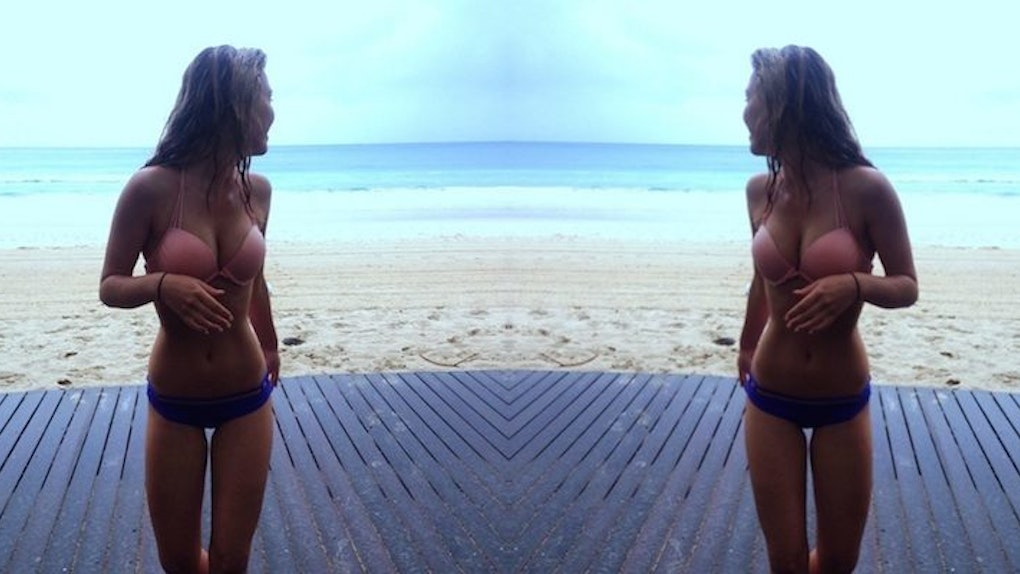 5 Things We Subconsciously Allow Instagram To Warp Our Perceptions Of

We've all been there: scrolling aimlessly through Instagram to pass the time when we come across someone who seems to have it all.

This person has the body, the guy, the money and the career. It's hard not to be jealous sometimes.

But what we don't stop to think about is how this person is choosing to represent him or herself.

People choose to use social media to represent their best selves. They don't use it to promote their personal problems and obstacles.

However, Instagram celeb, Essena O'Neill, is attempting to change that.

O'Neill, who now boasts a solid 800,000 followers, recently went on a social media hiatus and deleted over 2,000 posts from her Instagram page.

She then went back and edited her captions to reveal the truth behind the photos, writing things such as, "A 15 year old girl that calorie restricts and excessively exercises is not goals."

What O'Neill did caused quite a stir on the Internet. People got behind her and responded positively to her actions.

However, most of those supporters, myself included, will likely continue to use social media to promote their best selves.

But that doesn't mean we shouldn't be aware of the warped perceptions of reality social media creates.

When I was single, I definitely followed some people who seemed to have the picture-perfect, fairytale-esque relationships we all desire.

Now, after being in a relationship for a year, I realize how warped social media can make ideas of relationships. Not gonna lie, I post a lot of photos of my boyfriend and myself.

I know I portray us as having a fantastic relationship, which we do, for the most part. However, like any couple, we fight.

We have our moments of being incredibly irritated by the other person, and moments when the last thing we want to do is spend time together. That's normal of any long-term relationship, I think.

But it would never occur to me to post on Instagram and detail the fight we just had, or tell everyone about the reason we aren't speaking.

It seems like every time I open up Instagram, I see some girl talking about her trip to the gym, or posting a photo in just a sports bra.

I've posted similar things, but I definitely do not have a "goals" body. Most of the people I envy on Instagram have bodies I would die for.

They are toned, tan and strong.

Sometimes, I scroll through their pages, trying to get some inkling of how they achieved their seemingly flawless bodies. They make it look so easy, and I think that's what really gets to people like me.

I end up closing the app and feeling bad about myself, without realizing these people look this way because they have worked their asses off.

They also often have the backing of certain companies and supplements that may aid in weight loss. They have easy access to resources that normal people do not.

In addition to having those resources, they may also sacrifice certain things just to get a good, Instagram-worthy shot.

In one of her captions, O'Neill admitted to not eating that day so her stomach would look flatter in the photo.

These are the things we don't know when we're scrolling through our feeds.

I rarely take photos of food because they just end up looking unappealing. If I do take a photo, I have to go to certain lengths to make it look presentable.

All I know is most of the food I eat looks nothing like the food I see people posting on Instagram. Food is food, so why do we feel the need to photograph and edit it?

I read an article the other day about using a menu to bounce the light off a plate and get a better photo.

Yes, there was an actual article about how to photograph food for Instagram.

The reality behind food photos is the person posting them probably took numerous shots to get the one he or she posted, and still probably ended up doing a lot of editing.

No one consistently gets to eat food that looks that good.

Some people on Instagram just always look so darn cute, and they never wear the same thing twice.

However, O'Neill admitted she was paid to wear most of what she wore in certain posts.

There's nothing wrong with that. If someone offered me money to promote something on my account, I wouldn't think twice.

However, it's important to stop and consider the fact that the people we are envious of likely don't even own all the clothes they are seen in.

In a way, it's their job to post photos highlighting these items.

They may not have the bottomless wardrobe and jewelry collection we seem to think they do.

Filters are a large reason for this, but there are also so many other ways to edit oneself to appear more flawless. I don't think I've ever posted a photo without some sort of editing.

I'm guilty of using a skin retouching tool if I have an acne breakout, or whitening my teeth if I think they don't look white enough.

Anyone I come across in real life would know my Instagram is me, but they would also be able to tell I present my best self online.

I post inspirational quotes when I feel hopeless. I post selfies when I need a pick-me-up. I post photos of my boyfriend and myself when I need reassurance.

None of that portrays reality.

Yet, I have a feeling I'm not the only one who uses Instagram as a way to make myself feel good about my life.

It's just what our generation does.

But we never stop and ponder the reality behind the posts.