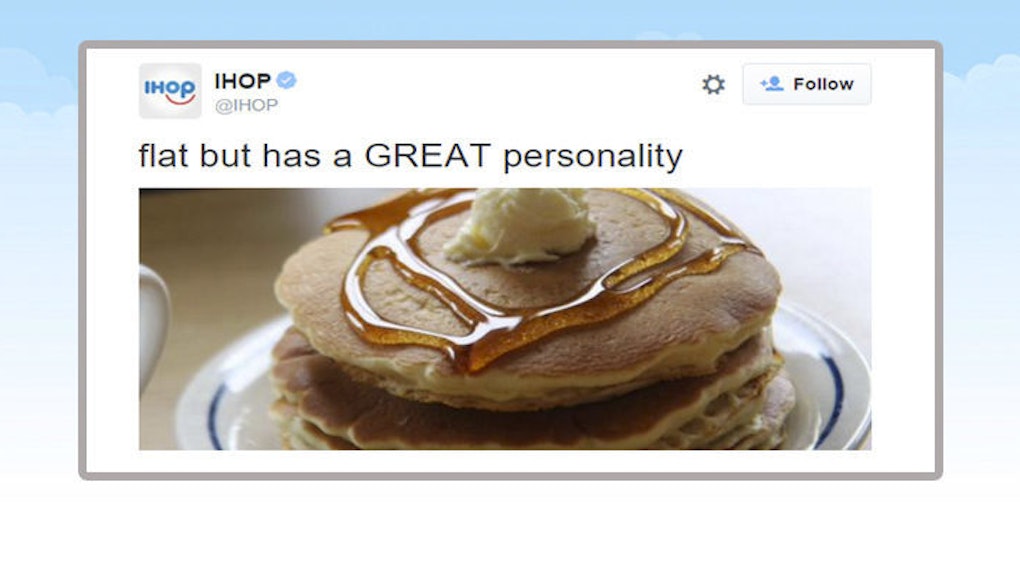 IHOP Tweeted A Really Sexist Joke, And People Were Not Happy About It

For the most part, companies adapted their brand messages to fit this want, and we've reaped the rewards by being treated to gold like THIS.

DOUGH a crust an unbaked crust RAY, a guy that likes pizza ME a pizza liked by a guy named ray FAH no idea what fah is SO so LA a city T tee — DiGiorno Pizza (@DiGiornoPizza) December 6, 2013

A pizza-based pun about "The Sound of Music"? Come on! That's genius!

I don't even LIKE microwaved pizza, but you KNOW I'm going to buy a pie of DiGiorno next time I'm at the grocery store.

This need to feel unique and relevant on social media can lead to missteps -- like when IHOP fixed up its followers a fresh stack of misogynist bullcrap on Twitter on Sunday.

Was the Internet pissed off by this? Ummm, does IHOP take an absurd amount of liberties by claiming it's the INTERNATIONAL House of Pancakes?

Does IHOP stand for "Irresponsible Harmer of People??" I am disgusted. Your tweet literally made me vomit. https://t.co/lqpdSub0SZ — rob delaney (@robdelaney) October 19, 2015\

IHOP apologized (thank pancake God). So, we can all go back to eating our Rooty Tooty Fresh 'N Fruities guilt free, the way pancake God intended.

Earlier today we tweeted something dumb and immature that does not reflect what IHOP stands for. We're sorry. — IHOP (@IHOP) October 19, 2015

Can we please go back to IHOP tweeting stuff marketing executives think "the youth" want to hear?