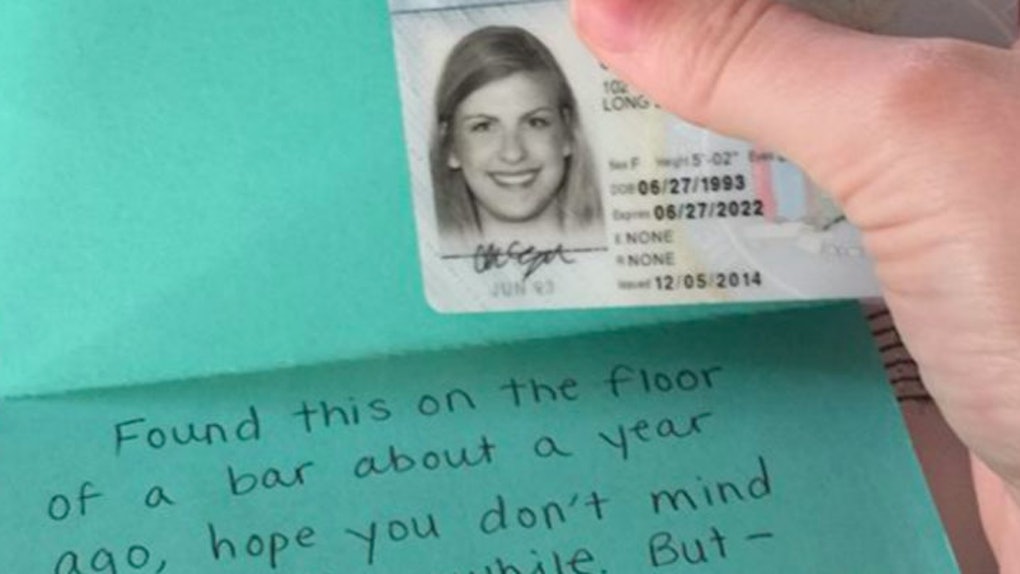 Getting a fake ID is a rite of passage for anyone underaged. Most use their older sibling's or their cousin's to get into college bars. Others dole out cold hard cash to get one that is hopefully a better quality than McLovin's.

Some people, the lucky few, happen to find one by chance -- and if you squint, they kind of look like the person.

I never had a fake ID to get alcohol, but I was a "Jennifer" who attended a prestigious law school for a year. It was easier to use her ID to get into my significant other's dorm than having them sign me in all the time.

Egan, who recently graduated from Columbia University, received an unexpected thank you note in the mail. With it was her ID. It read,

Found this on the floor of a bar about a year ago, hope you don't mind I used it for awhile. But – now I'm 21 so you can have it back! Thanks.

Egan said that she last saw this ID in a Lower East Side bar. She told Mashable,

I don't know how it got all the way upstate! I thought it was absolutely hilarious. No hard feelings to the anonymous girl. It's nice to know that she had a nice time in my honor. It was also sweet of the girl to send such nice stationary.

That is lovely stationary.

It was smart of the person returning the ID not to include her name and address.

Everyone else spotted that police academy paper in the background of the first picture right?

Egan won't be chasing down the imposter anytime soon, though. She said,

My father is one of the creators of The Police Academy at Bellevue Hospital in Manhattan. I recently graduated with my Masters in Social Work and he appreciates when I give him feedback on his programming through that lens.

Citations: Young woman finally gets her ID back along with a sneaky explanation (Mashable)