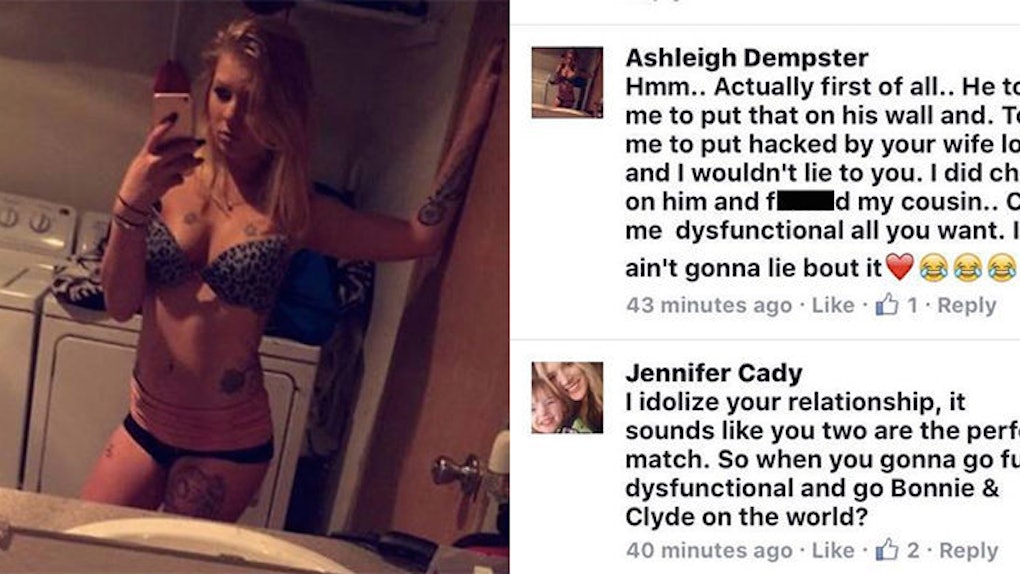 This Woman Cheated On Her Husband With Her Cousin

If you're going to have the fact you cheated be revealed, everyone would rather it not happen on social media, right? Wrong.

If there's one person who has no problem with airing out her own laundry in a place where all can see it, it's this woman, Ashleigh Dempster.

Ashleigh's story is a complicated one -- fascinating, but complicated nonetheless -- so we'll need to break down how this woman went from posting a selfie to her husband's wall to defending herself after admitting to practicing incest.

Here's how it all started.

After posting this picture, another user, Jennifer Cady started to come right at Ashleigh, alleging that Ashleigh cheated on her husband with a cousin.

Ashleigh admitted she cheated without even putting up a fight.

As more people made "wait, what!?" comments, somehow, Ashleigh was the one with the shocked reaction.

But people start piling it on...

...so eventually, Ashleigh's hubby had to jump into the fray to defend her honor.

But ultimately, that rescue mission would only last but so long.

As people went on and on with their jokes about her cheating, Ashleigh stopped commentating and apparently started taking comfort elsewhere, ensuring there was no happy ending here.

Yeah, I'm gonna guess Tim won't jump in with his cape on during Ashleigh's next social media trouble.