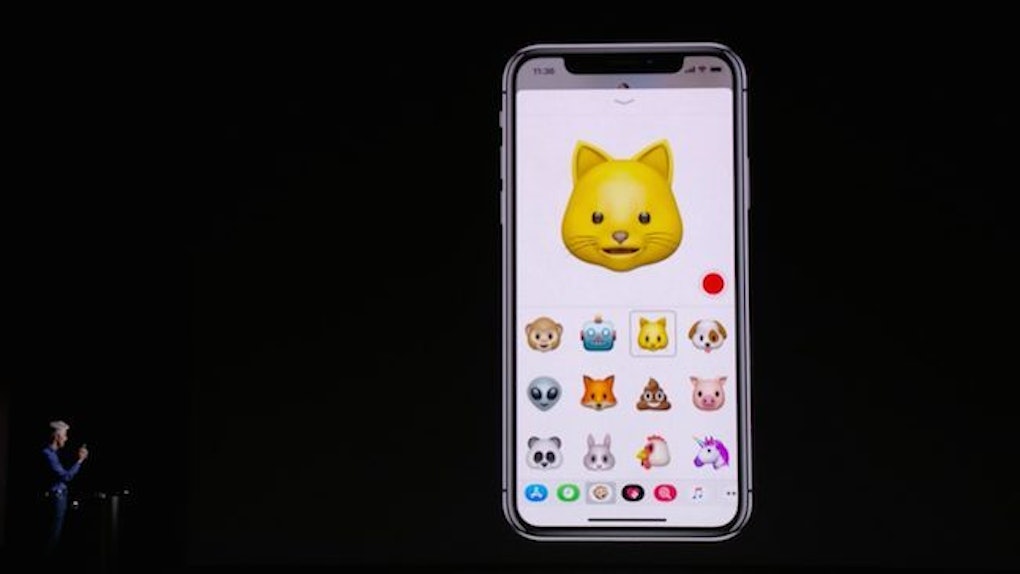 With the unveiling of the new iPhones at Apple's keynote event in Cupertino, California on Sept. 12, everyone is losing it getting ready for the new iPhone 8 and the iPhone X to be officially released. One of the things that makes Apple's new gadgets so very attractive is their new set of animated emojis — or "animojis," because that name is just too easy. But if you're eagerly looking up how to get animojis and anticipating downloading the fun new animations, I have some bad news for you. Right now, it seems like the only way to get them is to get Apple's new iPhone X to go with them.

The awesome new animojis aren't just animated, they're animated by your facial expressions. The new emojis use Apple's Face ID technology to map your face, and then match the chosen emoji to the patterns of your face and expression. So if you, say, want an animated poop who does your characteristic tongue-out and eyes-crossed face while spouting a catchphrase (look, man, I don't know your life. No judgement if that's what you really do, though), then you can make it happen.

Whether that's a positive or a negative you'll have to decide for yourself, though. As Apple's SVP of software engineering, Craig Federighi, said as he introduced the animojis — "If you were, by chance, wondering what humanity would do when given access to the most advanced facial tracking technology available, you now have your answer.”

The catch, is, of course, that in order to create those personalized animojis, you need Apple's new Face ID face tracking software. And where can you get that?

Honestly, I'd be furious that after getting me all excited about the animojis Apple isn't even going to let me actually get it without basically paying a month's rent — except there's a part of me that's kind of quietly impressed at the total shamelessness of making the most exciting new app only available on their most expensive new product. I mean, that takes some guts.

It seems likely, however, that anyone with the new iOS will be able to receive the messages — because after all, what's the point of animating a chicken to tell your friends to pick you up some KFC, if they can't even see the message and appreciate the irony? So what this basically means, I'm assuming, is that everyone who can't afford to drop a grand on the iPhone X should take a deep breath and prepare to get completely spammed with animated unicorn messages from their friends who went ahead and splurged.

Slate also points out that the new animojis also combine the worst aspects of both text messaging and voicemails, and completely undermines the point of texting, which is to, you know, not actually talk to people.

Beyond that, I foresee a lot of flubs when people are trying to quietly text in a library, or shop, or movie theater (animals), and someone sends through a mistimed animoji which shouts to the whole world that the person receiving it is a jerk who doesn't know to set their phone to silent after the previews are done. I mean, jeez.

So, now that I think about it a bit more, it doesn't feel like the end of the world if I won't be able to get animojis on my *cough* iPhone 5. Maybe my phone's, ahem, maturity will mean I can't receive them either.

But if I can, I have until Nov. 3 to prepare for the onslaught of poops with my friends' voices. Which is a sentence I never thought I would type, but hey, it looks like that's what the 21st century has brought us to. Thanks, Apple.