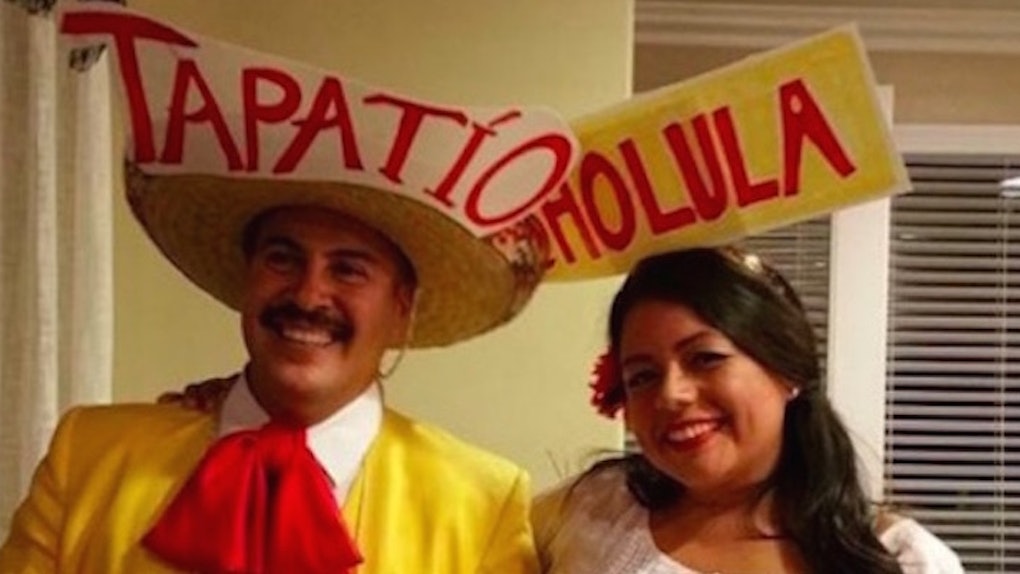 Hilarious Couple Creates The Hottest Halloween Costume Of All Time

Everyone knows that the best part about having a boo during Halloween is that you can dress up in epic coordinating costumes.

If you still haven't found the perfect costumes for all of your spooky endeavors with bae, you can look to the stars for some ideas and choose a couples costume based on your zodiac sign.

Or you can do what 16-year-old Samantha Solorzano's parents did and simply look inside your fridge for some Halloween costume inspo.

That's right. Solorzano's mom and dad recently came up with a clever Halloween costume, and I have to say this delightful duo might just be the hottest couple of all time.

That's right. Sadie and Ruben dressed up as Mrs. Cholula and Mr. Tapatio for a Halloween housewarming party and this perfect pair is literally EVERYTHING.

Apparently, the couple got the idea for these glorious costumes while they were sitting at a restaurant.

The Solorzano's noticed that Cholula and Tapatio hot sauces are always placed next to each other, so naturally, a human rendition of these condiments would make one seriously badass Halloween costume.

Ruben and Sadie were clearly right because these saucy ensembles are relationship goals AF.

Everyone at the Halloween party seemed to be pretty into their creative costumes too.

The couple even scored first place for best costumes thanks to these spicy DIY creations.

Samantha posted a few pictures of her hilarious parents on Twitter, and now, people just can't seem to get enough of this match made in hot sauce heaven.

No really, I'm serious. Their photos have received over 18,000 retweets over the past few days...

...and now people are basically losing their shit over this drool-worthy duo.

But then again, how can you not love a costume that makes you look ~spicy~ AF?

Some Twitter users applauded Sadie and Ruben for their creativity...

...and commented on how effing cute these condiments look as a couple.

While other people made jokes.

Then there were Twitter users who brought attention to the fact that this costume idea is basically the best thing that's ever happened to Halloween.

Because let's be real, Mrs. Cholula and Mr. Tapatio are clearly the perfect peppery pair.

If you ask me, Sadie and Ruben totally take couples costumes FTW.

It just goes to show that sometimes all you have to do is think outside of the box, or in this case, bottle of hot sauce, to achieve something truly incredible.

Yep, I think it's safe to say that these sizzling soulmates are the definition of Halloween #RelationshipGoals...

And now we're all secretly longing to find a Mr. Tapatio to our Mrs. Cholula.