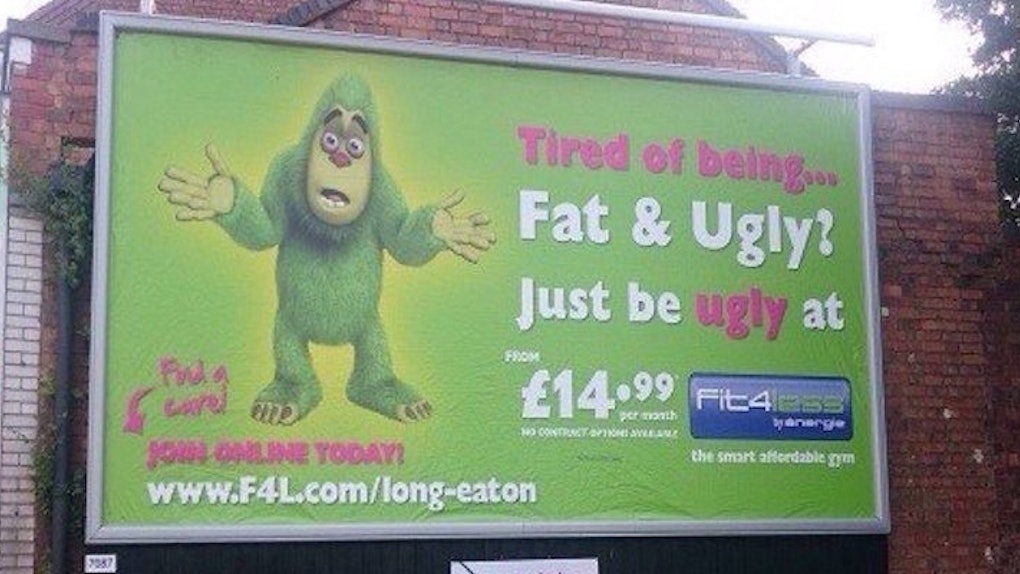 This Gym Tried To Encourage People By Telling Them To Be Ugly, Not Fat

There's a pretty clear line that defines what's appropriate for a gym ad and what's not.

Fit4Less, a UK gym, totally crossed the line with an ad telling people that instead of being fat and ugly, they could be solely ugly if they joined the gym.

Some ads we've seen basically say the same thing about being overweight, like this stunt a gym pulled with a guy in a fat suit or this ad that was taken down because it made people super self-conscious. They're not the shining beacon of body positivity, but at least those ads are more subtle with their insults.

I think this Fit4Less ad is the worst one I've seen yet. It reads,

Tired of being fat and ugly? Just be ugly at Fit4Less.

Is this a joke?

Can you imagine driving by that every day on your way to work?

Let's be real. Can we really expect quality from a gym called Fit4Less? I'm not too sure.

What's worse is this isn't even the first blatantly body-shaming ad the gym has thrown onto a billboard. Fit4Less was asked to take down its previous ad back in April because, again, it crossed the line:

Excuse me? This particular gym is next to a family supermarket. What would kids think about themselves and their bodies if they saw this?

On the other hand, some people think folks these days are just too sensitive and that the new ad is actually pretty funny.

Either way, there has got to be a better marketing strategy for Fit4Less than these weird, cartoony ads. Or maybe they're just trying to offend people and cross all of the lines so people like me write about it.

All publicity is good publicity, right?