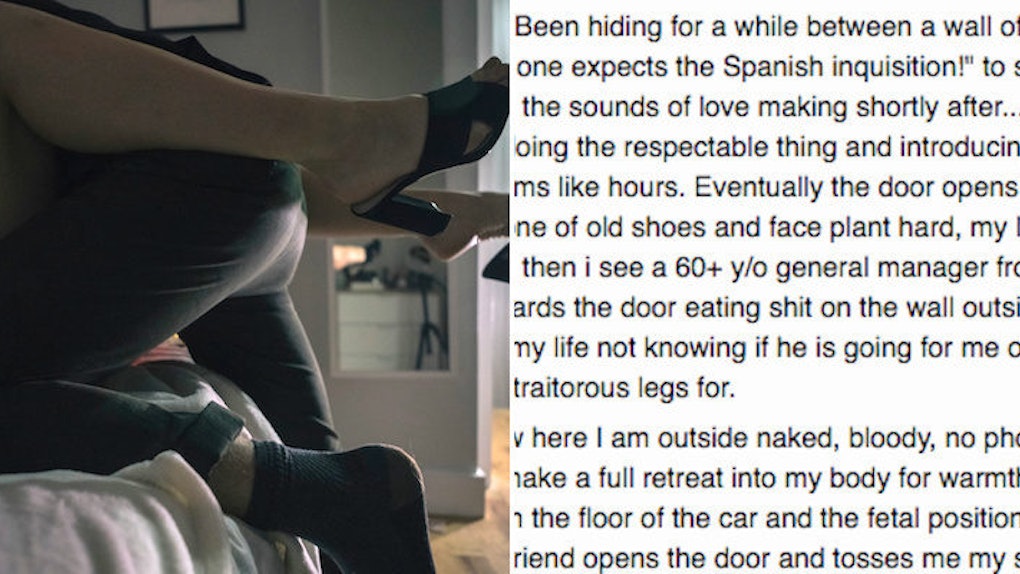 There's nothing worse than being betrayed by someone you love.

But if you thought being cheated on by your SO was pretty bad, oh, just you wait.

Recently, a Reddit user who goes by the name Hairymountainman shared a post on the "Today I Fucked Up" subreddit. He described the tragic way he found out his girlfriend had a sugar daddy.

The man started off by giving us a little background info about his relationship, writing,

This woman and I have been dating for about 2 months now yet I have never seen her residence. After a week of me pestering her she finally says yes, tells me to come over after work. We get off at 2 in the morning which made me assume I would be staying the night, bought a bottle of booze to help the night along.

Hairymountainman's girlfriend gave him the address as well as special instructions to park one house away.

Upon arriving at the address, he discovered his girlfriend lives in a really nice house that, based on her salary, is definitely out of her price range.

Normally, this would be a pretty big red flag for most people. However, Hairymountainman brushed it off and gave his girlfriend the benefit of the doubt.

Seeing this I assume she still lives with her parents which isn't to odd for a person in their low 20's (we both are), explains why she didn't want me over. Right?

As the evening progressed, things seemed to be going pretty great.

Hairymountainman and his girlfriend got drunk and watched movies into the wee hours of the morning, until she finally led him into the bedroom.

Upon entering her room, he noticed the decor was something you would expect to see in your grandparents' house, and even noted the nightstand had pill bottles and an OG alarm clock on it.

However, this dude was clearly thinking with the wrong head because he brushed off yet another red flag, and got straight to doing the deed with his girlfriend before passing out.

Little did Hairymountainman know, everything was about to go to hell in a hand basket.

Hairymountainman was shaken from his slumber by the sound of his girlfriend's phone alarm.

After hiding "between a wall of clothes and damn GUN SAFE" for quite some time, Hairymountainman started thinking about potential ways to make a break from his closet prison.

I am trying to decide if I should yell 'Leroy Jenkiiiiins!' or 'no one expects the Spanish inquisition!' to start my naked dash to my clothes and then freedom. Then comes an older sounding voice and the sounds of love making shortly after...'Oh shit her parents are home!' I think to myself, now my options are trying to sneak out or doing the respectable thing and introducing my naked self as their daughters boyfriend.

He ultimately decided to take the safe route and wait it out in the closet 'for what seems like hours' until his girlfriend finally came to his rescue and opened the door.

She signaled him to quietly follow her. However, it appears this dude does not know how to make a graceful exit.

I lunge from my throne of old shoes and face plant hard, my legs have never been more asleep. I hear a voice from bed saying "babe what is going on" and then I see a 60+ y/o general manager from a different shift sit up and stare into my naked soul.

Yep, talk about a seriously shitty way to find out your girlfriend has a sugar daddy.

All hell breaks loose and I sprint towards the door eating shit on the wall outside as my legs are apparently in a coma, hearing a thud behind me I pick myself up and run for my life not knowing if he is going for me or the gun safe. I make it outside with only a bloody nose and a few sore spots that I blame my traitorous legs for.

However, Hairymountainman wasn't out of the woods just yet.

Since he was naked and bloody with no phone and no keys, he hid behind the neighbor's house.

My little soldier is trying to make a full retreat into my body for warmth and my fingers are bright red. Sneaking to my car I jump in the back with only a winter hat from the floor of the car and the fetal position to keep me warm. After a few hellish hours of thinking death was at the door my now ex-girlfriend opens the door and tosses me my stuff and says get out quick.

Shortly after fleeing from his cheating girlfriend's house, Hairymountainman pulled over to get dressed and realized he only had 20 minutes to get to work.

If you ask me, the only thing worse than finding out your girlfriend is cheating on you with your boss is having to go face said boss after nakedly fleeing from his gun-filled closet.

This guy is clearly one hell of a trooper because he got to work on time and kept a low profile during his 10-hour shift, not knowing whether the GM knew he was the naked man.

However, the real kicker in this story came when Hairymountainman finally confronted his "supposed girlfriend" and she told him, "Please don't be mad, it's not like you asked if I had a boyfriend."

If there's one thing we can learn from this dramatic tale, it's you should always ask a girl if she has a sugar daddy and/or is fucking your boss before you get romantically involved.

Citations: TIFU by not asking if a woman was in a relationship (Reddit)