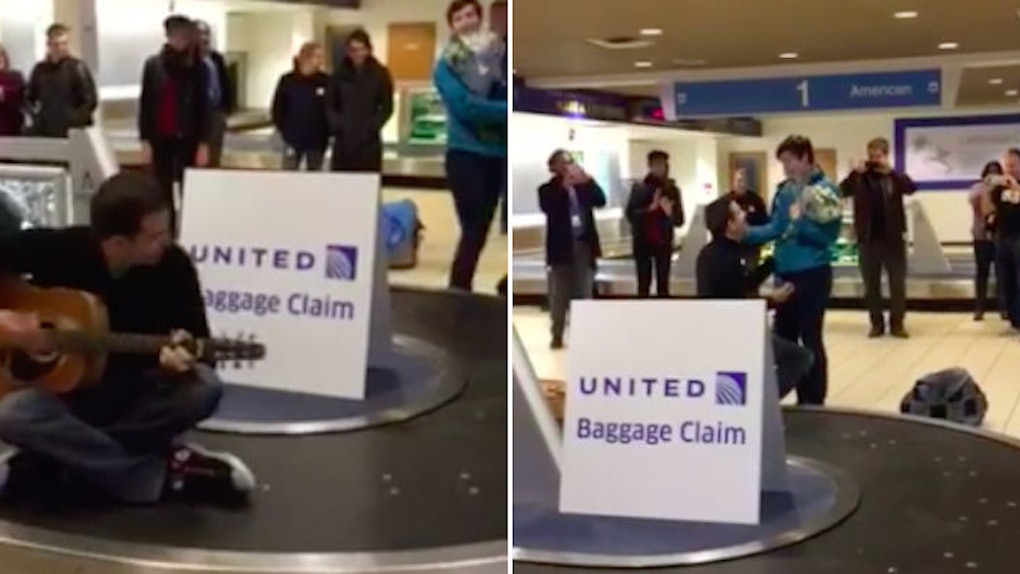 It seems as though proposals have reached their peak this time of year, and they're getting more creative and adorable by the minute.

'Tis the season for love.

For real though, whenever I go on social media I see a sweet engagement post, and I am v. proud to be a real sucker for romantic proposals.

I literally dream about what I hope mine will be like someday, as so many girls do.

Take this dude, for example, who planned out an elaborate marriage proposal for an entire year. Each and every day of the year, he basically declared his love for his GF and turned the clips into a short film.

If that incredibly sweet gesture doesn't say love is alive and well, IDK what does.

Now, this particular proposal took place at Akron-Canton Airport in Green, Ohio… and it started off on a baggage carousel, to be precise.

The guy in the video (whose name is Evan) plays his guitar while taking a ride on the baggage carousel.

He serenades his girlfriend, Elizabeth, and the surrounding people in the audience (who are probably waiting for their suitcases to pop out).

Once Evan gets off, he talks to his GF (probably saying something real sweet), and then gets down on one knee to pop the big question to her.

This proposal is adorable AF, and the story behind this couple's love story is even cuter. The Facebook video was captioned,

All the feels this morning as Evan asked Elizabeth to marry him, and of course, she said yes! What makes this proposal even more aw-worthy is that both are aviation enthusiasts. Evan is currently a student pilot and Elizabeth is working on the Boeing 777x in Seattle! We couldn't be more excited for them, and props to the United team at CAK for making this proposal flawless.

People couldn't get enough of this proposal, so much that the video was shared and the love was spread over 15,000 times on Facebook.

This person seriously gets my FEELS.

Seeing how much thought this dude put into popping the question to his girlfriend seriously proves true love exists.

Someone give this bro an award, because he most certainly deserves it.

Citations: Watch This Man Romantically Propose to His Girlfriend with the Help of a Baggage Carousel (Cosmopolitan)