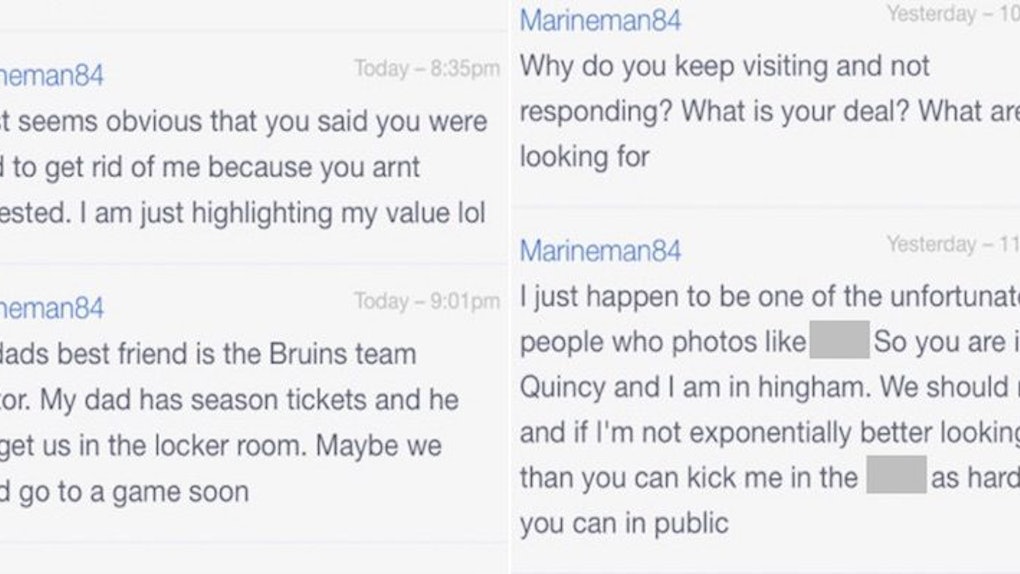 The world is in a sad state when you can't hop on a dating site, connect with a guy who loves boating and fall deeply in love.

In reality, ladies, you'll be 30 soon, and OkCupid user Marineman84 isn't going to wait around for your face to fall before he sweeps you up in a whirlwind of romantic man-ranting.

He might not be photogenic, but that doesn't mean every woman can treat him like an invisible monster with admittedly sore balls.

Womankind is lucky he exists, TBTFH.

There is only so much misdirected rage women can suffer, sadly, before putting angry man-children in their places.

Have you ever considered taking responsibility for your own misery, dude? No, you're right, that's crazy.

Women are amazing… like, until they turn 30. Then they're obviously expired old cans of sweet corn.

Boston resident pizzahutgurl snapped screenshots of the interaction and uploaded them to Tumblr under the username wefoundthesea, warning women of the creep's short fuse.

Rather than further engage with Marineman84, she replied to him in a Tumblr post, writing,

Just because you messaged me doesn't make me obligated to message you back, even just to tell you i'm not interested… This is what dealing with street harassment looks like on the internet.

She reminds her fellow “too picky” pals,

There no such thing as having over inflated amount of self worth ladies. Do your f*cking thing. Own who you are and be proud of it.

Good thing Marineman84 is a “super handsome and f*cking rich lawyer.” He should have no trouble finding someone to put up with his insanity.